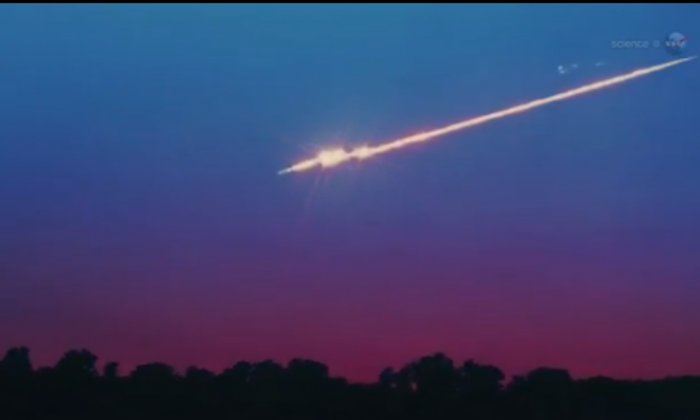 Screen capture of ScienceCasts: A Wonderful Night in April
Science

Meteor shower peaking: The Lyrid meteor shower, which takes place every year in April, will peak on Sunday night and early Monday morning.

However, as Space.com notes, the bright light of the moon will likely obfuscate the meteor shower’s full brilliance.

For those in North America who want to see it, the best time to view the Lyrid meteor shower will be between 3:45 a.m. and 4:30 a.m.

On average, the meteor shower lasts for around 10 days, starting on April 16 and ending around April 25, according to Yahoo News. Stargazers note that they typically see around 20 meteors per hour during its peak.

Accuweather.com said that there is always potential for more meteors to appear.

“It is unpredictable,” Mark Paquette of Accuweather said. “Sometimes lyrids have ‘surges’ which can break up the rate to near 100 per hour.”

The Lyrid meteor shower is the first major one since the Quadrantids in January.

“Lyrid meteors are typically as bright as the stars in the Big Dipper, which is to say, middling brightness, but some are more intense, even brighter than Venus,” Paquette said.

Mark Hammergren, an astronomer with Adler Planetarium in Chicago, said that since ancient times, astronomers have noted surprises.

“Brief outbursts of around a hundred meteors per hour have been noted a couple of times in the 20th century, and Chinese astronomers in 687 B.C. recorded Lyrid meteors falling like rain overhead,” he told National Geographic.

To best view the meteor shower, Space.com notes that one should not directly stare at them. It added that lying directly on your back and looking straight up is the best method.

And as with any skywatching event, it’s best to get away from the city, where there is significant light pollution.