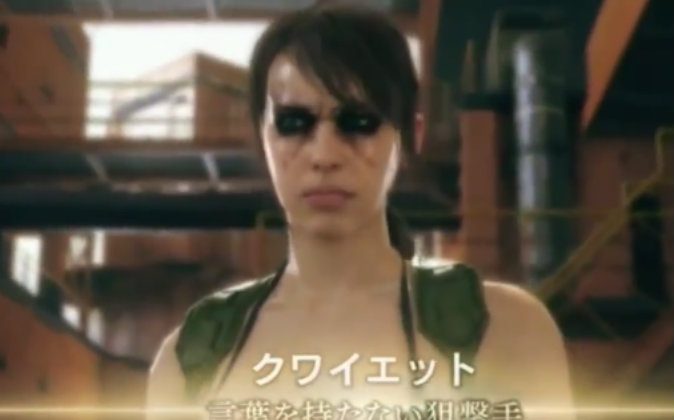 A new Metal Gear Solid V: The Phantom Pain trailer is out.

In the forty second teaser, Quiet is seen leaping from a helicopter from quite a height into what appears to be a Diamond Dog base.

She seems to possess some kind of invisibility ability, as she vanishes before hitting the ground, survives the fall, and quickly loses her hand cuffs.

After landing and removing her stealth ability, Quiet’s eyes suddenly darken, and a couple of red beret soldiers who heard her fall started to approach her before the teaser ends.

Game director Hideo Kojima will reveal more about MGS V at the Tokyo Game Show next week on Thursday, September 19.

Kojima and Konami intend to change things up at TGS, and they will not be showing off another Afghanistan mission play through, a Konami representative on NeoGAF reveals.

On his Japanese Twitter account, Kojima showed a screen shot from a scene that will be showed at TGS, and it features Big Boss two other characters.

Kojima also announced a “Metal Gear Collection 2014” on Twitter, and did not provide any other information.

Metal Gear Solid V: The Phantom Pain will be available on the PlayStation 3, PlayStation 4, Xbox 360, and the Xbox One, and is expected to be released in 2015.