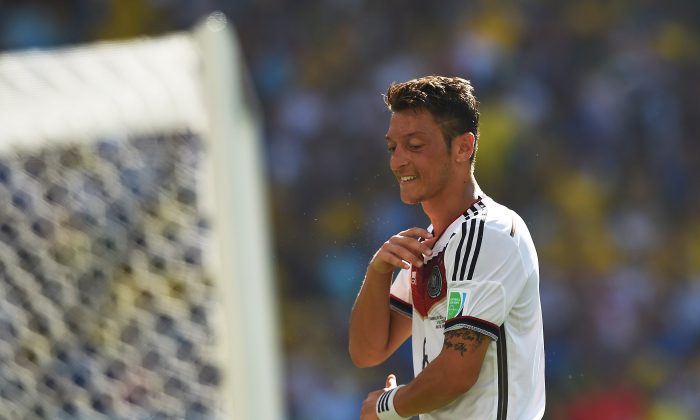 Germany's midfielder Mesut Ozil reacts during the quarter-final football match between France and Germany at the Maracana Stadium in Rio de Janeiro during the 2014 FIFA World Cup on July 4, 2014. (PEDRO UGARTE/AFP/Getty Images)
Gaming

How does German international Mesut Ozil rate in a video game?

At World Cup 2014, Ozil has been criticized for his ineffective play.

Although the 25-year-old Arsenal midfielder scored a goal against Algeria, his overall play in that game was poor, and he never really got going or get anything started.

In FIFA 14, however, Ozil is a rather effective player, with a base rating of 87, and a growth potential of 2, which gives him a maximum rating of 89 in Career mode, according to Futhead.com. Players in FIFA 14 can outgrow their potentials, though, so Ozil may improve if picked often by the player.

In Ultimate Team, Team of the Week Ozil has an 88 rating, while the normal variant has a rating of 87.

Check out a video review of FIFA 14 Ozil here.

In real life, Ozil made 33 appearances for Arsenal this season, scored 6 goals, and provided 11 assists.