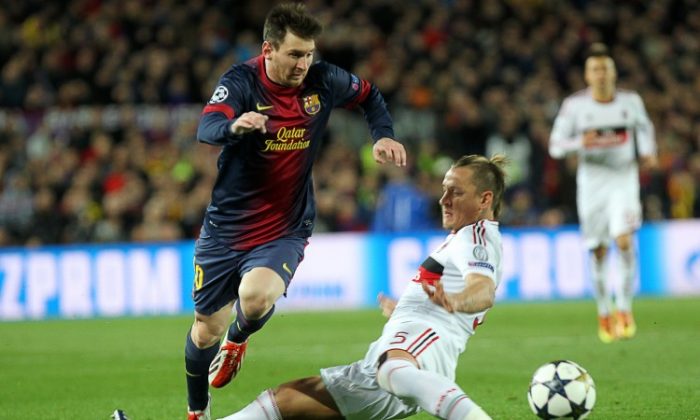 A pair of sublime first half goals from Lionel Messi set Barcelona on their way to the Champions League quarterfinals with a 4–0 win at the Nou Camp on Tuesday night against AC Milan.

The job was completed after the break, thanks to David Villa and Jordi Alba, who put the result beyond doubt with a goal in injury time. At that time, AC Milan was pressing for the away goal that would have put a totally different complexion on the tie.

“These players have shown once again that they are very special. They put in a great work-rate; they showed real dedication. I am very proud of them,” Barcelona assistant manager Jordi Roura said on UEFA.com.

“We are sad because we had great expectations after the first leg,” Milan manager Massimiliano Allegri said after the match. “Barcelona have great players like Messi and Iniesta who can dribble past any defenders easily, even after running for 90 minutes.”

Barcelona received a boost with playmaker Xavi Hernandez fit to start the match. The big change from the first leg was to bring in David Villa as an orthodox striker with Messi dropping back into the hole behind him.

The plan was that, with Villa to worry about, the Milan defenders would be unable to shadow Messi as effectively as they had at the San Siro.

Catalan boss Tito Vilanova is still undergoing cancer treatment in the U.S., so Roura continued in charge of the team.

Milan was without Giampaolo Pazzini who fractured a leg last weekend. Mario Balotelli was Cup-tied having played for Manchester City earlier in the tournament. That meant Stefan El-Shaarawy was partnered by 18-year-old M’Baye Niang.

Allegri said before the match that his team should forget about the 2–0 in the first leg. “They will put us under a lot of pressure, but they are so good at generating chances that when you play against them you have to be very good in defense and much better in attack,” he said.

The last time Barcelona went out of the competition at this stage was against Liverpool six seasons ago. AC Milan’s last victory away to Barcelona in the Champions League was a 2–0 triumph in September 2000. Since then, they’ve had two draws and two defeats.

Yet with Barca having lost three of their last five games, the visitors did have cause to be quietly confident. However, the Catalans had other ideas.

They put Milan under tremendous pressure right from the kick-off and before the five-minute mark was reached, Messi had reduced the two-goal deficit from the first leg to one.

The Argentine star had barely managed a shot on target in Milan, but on this night he was back to his lethal best, sending an unstoppable drive past Christian Abbiati despite being surrounded by a clutch of defenders on the edge of the area.

It was really half an hour or more before Milan could settle, but then they did begin to enjoy the odd excursion into Barcelona territory. On 34 minutes, El-Shaarawy had an opportunity coming inside the area from the left, but his shot was weak and easy for Victor Valdes.

Then four minutes later, the youngster Niang showed his pace with an incisive counter-attack and was unlucky to see his shot come back off the post. This was the closest Milan would come to scoring throughout the match and, with the gift of hindsight, was probably the defining moment in the tie.

“Football is also a matter of centimeters because we hit the post when we could have made it 1–1 and a few moments later, they scored the second with a ball going between the legs of our defender,” Allegri said.

Had that effort gone in, the visitors would have secured their away goal and been in the box seat; not to mention receiving a huge confidence boost to help hold out for the remainder of the game.

Yet as so often happens in football when there has been a near miss at one end, the opposition goes up the other end and scores a goal. The peerless Andres Iniesta won the ball and found Messi with just enough space again on the edge of the Milan penalty box. The world’s best player did the rest with a left-footer past the outstretched left hand of Abbiati into the bottom corner.

Catalans Wrap It Up

The second half got underway with another spell of concerted pressure from the home side. Milan held out for 10 minutes until a perfect pass from Xavi set Villa free on the right side of the 18-yard box.

The striker finished the way he used to before the terrible injury that kept him out of action for what seemed an eternity. It was his first goal in this season’s Champions League and it put his team ahead on aggregate for the first time 3–2.

Being only too well aware that Milan must now find a goal, Allegri brought on Sulley Muntari, Robinho, and former Barcelona attacker Bojan Krkic. They did manage to give Barcelona one or two nervous moments during the last 10 minutes, but it all proved fruitless when Jordi Alba put the game and the tie to bed with a counter-attacking goal in the first minute of stoppage time.

Galatasaray Through to Quarters

Galatasaray are also through to the last eight of the competition following a dramatic 3–2 win away to Schalke—the latter’s first defeat in this year’s tournament.

Strengthened by high profile signings Wesley Sneijder and Didier Drogba, the Turkish Champions went through 4–3 on aggregate. It was the first time in 12 years that Galatasaray has made it to the quarterfinals.