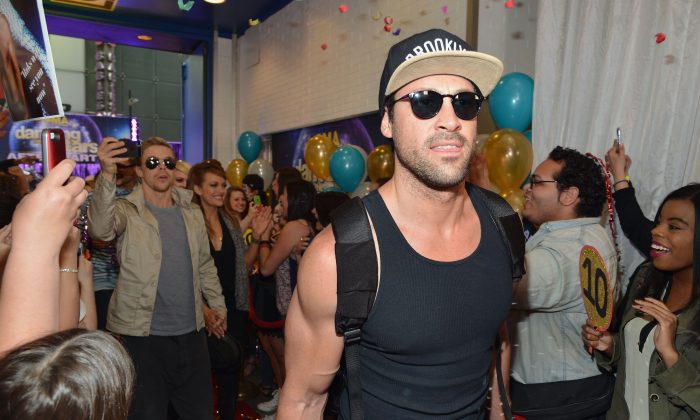 Maksim Chmerkovskiy had big news waiting for him as he flew back into the country from India. He was being linked to, in various accounts, Jennifer Lopez, Kate Upton, or (still) Meryl Davis.

The Dancing with the Stars regular decided to address the rumors, but his comments don’t seem to clear anything up.

“I just flew in literally, and I read about this,” he told Access Hollywood. “Those are big names, I’m flattered… I just don’t think that’s anybody’s business.”

What would you like me to say? I’m not dating J.Lo, Meryl and Kate. Maybe I’m dating all three, who knows!” he continued.

Maks and Lopez were reportedly spotted in the VIP area of Foxwoods Casino over the weekend.

“Maks was whispering into her ear and hugging her,” Us Weekly reported. “They looked very flirty with each other … She had a huge smile on her face and looked like she was having a great time.”

Maks didn’t elaborate about his relationship with Lopez but added: “I love Meryl. We’re friends and we’ll always be.” He also said his personal life “won’t be anybody’s business.”

Maks has been a bit varied in his responses to the Meryl and Maks rumors specifically, saying at one point that he and Meryl were in a “showmance.”

Previously hinted at and confirmed with Access is that Chmerkovskiy is not planning on returning to “DWTS” as a dancer.

And while not admitting to relationships with any woman, he did tell Social Life magazine recently that he wants to find a partner to settle down with.

“I raised so many children at the studio that I am ready to create one of my own,” he said.. “I am really ready to have a family now. I need an outlet. I have so much I want to give, and I need someone to give it to.”