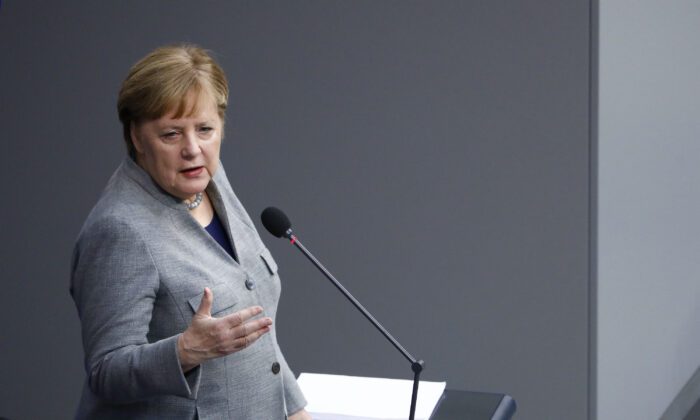 German Chancellor Angela Merkel speaks on behalf of the federal government during a one-hour question and answer session by parliamentarians at the Bundestag on Dec. 18, 2019 in Berlin, Germany. (Michele Tantussi/Getty Images)
By Nicole Hao

German Chancellor Angela Merkel said on Dec. 18 she has not been informed of any threats by Chinese authorities to retaliate if Germany were to block Huawei from its 5G rollout.

China’s ambassador to Germany Wu Ken said last week that “there will be consequences,” if Huawei was excluded from the German market.

Wu went on to point out the millions of cars that German manufacturers sell in China, adding, “Can we also say that these German cars are no longer safe because we’re in a position to manufacture our own cars? No, that would be pure protectionism.”

The ambassador’s remarks were interpreted by commentators as amounting to a threat by the regime to cut off German automakers from the Chinese market should Huawei be blocked from supplying 5G in Germany.

“Nothing has been expressed to me about pressure by the Chinese authorities,” Merkel told Germany’s lower house of parliament on Dec. 18, Reuters reported.

China is the biggest market for German automakers Volkswagen AG, BMW AG, and Daimler AG, the maker of Mercedes-Benz. Each of these companies operate in China under joint-ventures with a local firm, and have invested billions of dollars in establishing manufacturing and distribution facilities in the country.

This is not the first time the regime has threatened retaliation if Huawei is barred from doing business in a country. Last week, Danish local media reported that the Chinese ambassador to Denmark threatened the leader of Danish autonomous region Faroe Islands that it would cancel a trade deal with the region if Huawei was not awarded a 5G contract.

The United States, which earlier this year blacklisted Huawei from doing business with American companies over national security concerns, has sought to convince its allies to bar the Chinese tech giant from building their next generation wireless network.

Merkel’s conservatives and their coalition partners the Social Democrat have delayed a decision until next year on security rules for Germany’s 5G network, which could result in Huawei being excluded from the rollout, Reuters reported on Dec. 17.

While Merkel has been against singling out an individual company for exclusion from the network, and instead prefers adopting a set of stringent security criteria that potential 5G suppliers would have to adhere to, others within her coalition have voiced concern about the company.

Last week lawmakers from Merkel’s coalition introduced a bill that would impose a ban on “untrustworthy” 5G providors. While the proposed legislation does not name Huawei, the Financial Times reported that it targets suppliers where there is a “risk of state influence without constitutional control, manipulation or espionage”—wording directed at the Chinese company.

The draft will now be reviewed by Merkel’s Chancellery and the Economy Ministry.

The tech company, the world’s largest maker of telecom gear, has attracted heightened scrutiny over the past year for its links with Chinese military and intelligence agencies, treatment of its employees, alleged theft of competitors’ trade secrets, and alleged breach of U.S. sanctions against Iran.

One of the initiators of the bill, Norbert Röttgen, lawmaker from Merker’s Christian Democratic Union and head of German parliament’s foreign affairs committee, told the Financial Times that Merkel’s proposal to impose 5G security rules was not sufficient.

“You don’t just need technical certainty — you need the suppliers to be politically trustworthy too,” Röttgen said on Dec. 13. “Companies that are at the mercy of state influence just aren’t trustworthy.”