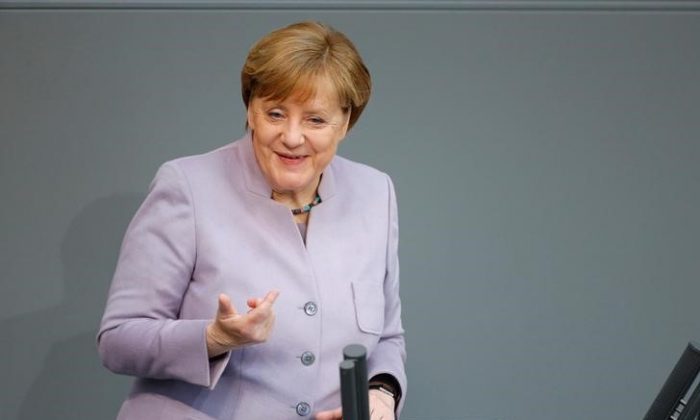 Merkel Says She Has Good Relationship With Trump Despite Frosty Start

BERLIN—German Chancellor Angela Merkel said on Saturday that she and President Donald Trump have built a “good working relationship” even though the two had frosty exchanges last year that raised fears of damage to the pivotal U.S.-German partnership.

“President Trump and I have developed a good working relationship, which doesn’t rule out having different points of view,” Merkel told the RedaktionsNetzwerk Deutschland (RND) group of newspapers.

“When we talk with each other, for instance, it’s about developing a common strategy for the Ukraine conflict or the horrible war in Syria. It’s also about the fight against terror or the disastrous humanitarian situation in Yemen—all these conflicts are at the doorstep of Europe.

“If we want to resolve these problems, if we want to help people, we need strong involvement from the United States,” Merkel said.

In his 2016 election campaign, Trump had disparaged Merkel for allowing more than a million refugees from Syria, the Middle East and Afghanistan into her country, saying she was “ruining Germany” with those policies. He had also criticized Germany’s large trade surpluses and threatened to import duties.

After Trump won, Merkel congratulated him but pointed out importance of democracy and the need to respect people’s dignity regardless of their origin, color of their skin, religion, gender, sexual orientation or political views.

Merkel’s relations with Trump‘s predecessor Barack Obama got off to an awkward start when she rejected his request to speak at the Brandenburg Gate during the 2008 presidential campaign. But the two grew close, cooperating on sanctions against Russia and launching negotiations on a transatlantic free-trade deal.

Merkel met Trump for the first time in March—an encounter closely watched by governments around the world for clues about the transatlantic alliance that helped shape the post-war global order that Trump was threatening to upend.

The two leaders’ differing views on trade, Russia and immigration led to some uncomfortable moments at a joint news conference which ended oddly with a quip by Trump about wiretapping that left Merkel visibly bewildered.

But Trump has since praised the chemistry he has developed with Merkel and the two have spoken regularly on the telephone. She also invited Trump‘s daughter Ivanka to address a conference in Berlin.

“When I visited him in Washington, we talked about trade agreements,” Merkel said. “The U.S. president is asking for fair conditions from his country’s point of view, and we’re naturally looking out for German and European interests.”

“It’s right indeed that we need to invest more at home,” she said, adding her government has been doing that. “But I’d also like to say … we’re proud that there is such strong demand around the world for our products. That’s our standard and many people are working very hard for that.”