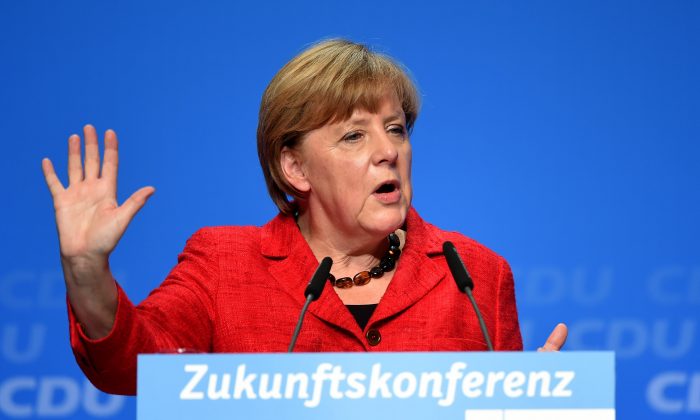 Merkel: No Need for New Taxes to Pay for Care of Migrants

BERLIN—Germany will not have to raise taxes to help pay for the hundreds of thousands of refugees and other migrants who have been flooding into the country, Chancellor Angela Merkel said in an interview released Sunday, and the government should have new regulations in place by November to help deal with the influx.

Germany expects at least 800,000 newcomers this year if not more, but Merkel told top-selling Bild newspaper in a preview of an interview to be printed in Monday’s edition that there would “definitely” be no tax increases to help care for them.

“We can be pleased that we have been well managed for years and that our economic situation is currently good,” she said.

Merkel, who has seen her popularity dip slightly amid concerns over the drastic increase in asylum seekers, also sought to allay fears that the numbers could overwhelm the country’s health care system.

Nobody should “worry that a refugee will take away from their own quality of care.”

In a separate interview, Germany’s new government coordinator for refugees and other migrants said the country can cope with the flood of newcomers, but must streamline its systems for dealing with them.

Peter Altmaier, Merkel’s chief of staff who was this month put in charge of the government response to the influx of newcomers, told Bild that Germany “won’t turn its back” on anyone in need and must reduce bureaucracy and speed up the asylum process. He added that Germany also needs to quickly send home those not truly needing asylum.

New regulations will address issues like the fact that Germany provides asylum seekers more spending money than most in the European Union—a “disincentive” for them to seek asylum elsewhere.

Germany has said that refugees fleeing Syria’s civil war or other conflicts can almost be guaranteed to be given asylum but others seeking to better their economic situation, primarily from the Balkans, will almost certainly be sent home.

Merkel said that in addition to focusing on the rapid removal of migrants who will not be allowed to stay, new regulations will also seek to address other issues like the fact that Germany provides asylum-seekers more spending money than most in the European Union—a “disincentive” for them to seek asylum elsewhere. Instead, she said, Germany might focus on providing newcomers with benefits “in kind” rather than in cash.

Meantime, Bavarian Gov. Horst Seehofer, who heads the Bavarian-only CSU party in Merkel’s conservative bloc, defended his criticism of the chancellor’s migrant policy, telling Die Welt newspaper it “has nothing to do with racism and xenophobia.”

Bavaria has been the entry point for most of the people entering Germany seeking asylum, and Seehofer said, “The current influx has overwhelmed us.”