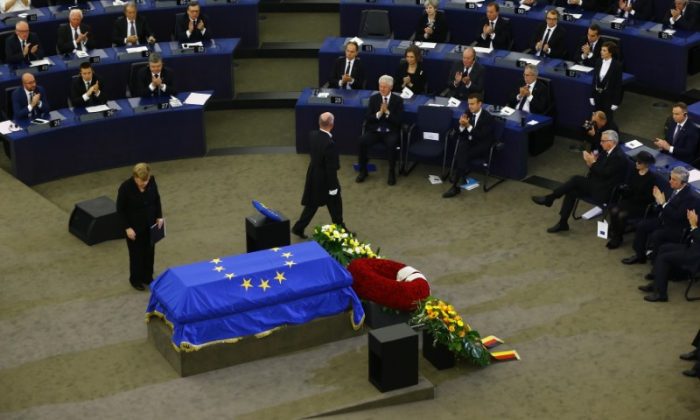 German Chancellor Angela Merkel pays respect in front of the coffin of late former German Chancellor Helmut Kohl during of a memorial ceremony at the European Parliament in Strasbourg, France on July 1, 2017. (REUTERS/Arnd Wiegmann)
Europe

Merkel Bids Farewell to the Man Who United Germany

Leaders from the United States, Russia, and across Europe paid tribute to Helmut Kohl at a memorial on Saturday, marking the achievements of a man who propelled a united Europe.

Kohl was Germany’s leader from 1982 to 1998 and guided the divided state into a unified whole. Angela Merkel was a minister in his government, recruited from her role as leader of the opposition in the former East German state as soon as the two countries were united.

“Without Helmut Kohl, the lives of millions of people who until 1990 lived behind the wall would have gone totally different. Of course, also mine,” said Merkel.

Merkel wasn’t the only world leader to pay tribute to the former chancellor. Former President Bill Clinton said Kohl gave people the chance to be involved in something bigger than themselves and Russian Prime Minister Dmitry Medvedev said Kohl was “the architect of the world order,”  and a “wise and sincere person.”

The world lost a man who brought it closer together, said Former Luxembourg prime minister and current president of the European Commission Jean-Claude Juncker.

The two-hour memorial took place in one of the EU’s three working parliaments, in a city that has passed between Germany and France several times, a symbol of sorts to inspire European integration.

Afterwards, Kohl’s casket was flown by helicopter to his hometown of Ludwigshafen across the Rhine. It was later carried in procession before being transported by riverboat to his final place of rest in the city of Speyer.