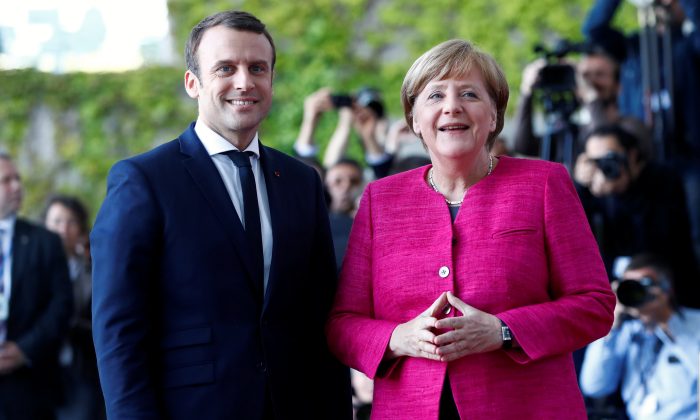 German Chancellor Angela Merkel and French President Emmanuel Macron arrive at a ceremony at the Chancellery in Berlin, Germany on May 15, 2017. (REUTERS/Fabrizio Bensch)
International

BERLIN—German Chancellor Angela Merkel and new French President Emmanuel Macron agreed on Monday to draw up a roadmap to deeper European Union integration and opened the door to changing the bloc’s treaties to facilitate ambitious reform.

A day after Macron’s inauguration, the two leaders struck a consensual tone in Berlin after talks in which they sought to reinvigorate the Franco-German relationship and the European project that has been shaken by Britain’s planned exit.

The run-up to the meeting had been marked by a row among senior German politicians over how to respond to Macron’s calls for closer EU integration, with some concerned that Berlin would be asked to pay for struggling states that resist reforms.

Merkel said that Germany needs France to succeed, emphasizing that “Europe will only do well if there is a strong France”.

“We agreed that we want to develop a road map for the European Union’s medium-term perspectives,” she said in a joint news conference with Macron.

“There is a common conviction that we cannot only deal with Britain’s exit (from the EU), but instead that we must above all think about how we can deepen the existing European Union and especially the euro zone.”

With Germany’s economy—Europe’s largest—outperforming that of France, the traditional Franco-German motor at the heart of the EU that has often misfired in recent years. Monday’s meeting was an effort to inject some dynamism into the partnership.

Crucially, both leaders said they were open to the idea of changing the EU’s treaties.

German Finance Minister Wolfgang Schaeuble, an arch conservative who has come to personify Berlin’s focus on fiscal rectitude, had suggested that Macron’s idea of creating a budget and finance minister for the euro zone was unrealistic because it would require politically thorny changes to the EU treaty.

But both leaders said they could tackle treaty change.

“In the past, the subject of treaty change was a French taboo. It will no longer be the case,” said the French president, who earlier arrived at the chancellery to cheers from a crowd chanting “Macron! Macron!” and waving European flags.

Merkel said that, from Germany’s viewpoint, treaty change would be possible, adding: “I would be ready to do this, but first we will work on what we want to reform.”

Macron sought to allay concerns among German conservatives that he could push for the euro zone to develop into a “transfer union” in which Germany is asked to bankroll other states.

The president, a 39-year-old former investment banker, said he did not support the idea of so-called Eurobonds, which could allow euro zone countries to issue debt jointly, with some benefiting from lower risk premiums thanks to Germany’s creditworthiness.

“I have never defended (the idea of) Eurobonds or the mutualization of existing debt in the euro zone,” he said.

A staunch European integrationist, Macron pledged after taking office on Sunday to restore France’s standing on the world stage, strengthen national self-confidence and heal divisions that the bitterly fought presidential campaign had opened up.

Largely unknown to the wider public three years ago, Macron enjoyed a meteoric rise to the presidency, beating Marine Le Pen of the far-right National Front on May 7 after a long campaign exposed deep splits over France’s role in Europe.

He sought on Monday to show solidarity with Germany on the migrant crisis—an issue on which Merkel has pressed for EU countries to work together—by saying that a common asylum policy was one area where Paris could cooperate with Berlin.

“We need more pragmatism, less bureaucracy and a Europe that protects our citizens,” he added.

In turn, Merkel said she is open to a Macron proposal to create a level playing field between EU countries and other international trade partners.

A former economy minister under France’s previous president, Socialist Francois Hollande, Macron is the youngest post-war French leader and the first to be born after 1958, when President Charles de Gaulle set up the Fifth Republic.

Merkel, 62, has been chancellor since late 2005, when Jacques Chirac was French president. Europe’s so-called Franco-German motor has often worked best in the past when leaders of opposite political persuasions have been in power.