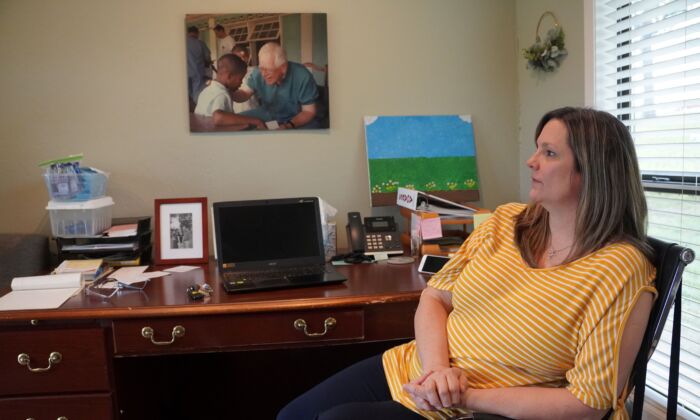 Volunteer Beth Knox and a Mercy Works team of volunteers delivered 600 "Border Patrol appreciation packs" to agents in McAllen, Texas, in March. Knox is photographed in her office at Mercy Works on April 12, 2022. (Patrick Butler/The Epoch Times)
US

Nonprofit says patrol members feel they're hated not only by migrants, but by many Americans
By Patrick Butler

Who thinks of showing appreciation to southern U.S. Border Patrol agents as they grapple with a flood of illegal immigrants overwhelming their efforts?

Beth Knox of Mercy Works in Garden Valley, Texas, and a team of like-minded souls did, distributing 600 “Border Patrol appreciation packs” valued at more than $15,000 to two different units near McAllen, Texas, on March 23.

The idea all started with a Mercy Works trip in November to Reynosa, Mexico, and McAllen.

On the Mexican side, there are wall-to-wall tents in the city plaza of Reynosa, Knox said.

“It’s packed out. They say there are about 4,000 immigrants living in that square block.

“On the American side, we had dinner with a Border Patrol agent, a relative of one of our team members. What he said grabbed our hearts as he related what they were going through.

“It was hard for us to hear how overwhelmed, how hated they feel, not only by migrants but even by some people on the U.S. side who are sympathetic to the migrants.”

Knox said some agents had even been threatened by cartels on the American side.

“We didn’t realize until that night the amount of pressure they were under. It’s not just that so many people are coming across. They think they don’t have the resources or the backing, and that’s stressful, especially when it has to do with the security of your country.

“So we thought of Border Patrol appreciation packs, and put the word out for funds to make 600.”

In March, they were delivered.

“I went to one of the larger units, and another team handed out about 200 at another unit,” Knox said.

“We spoke with some agents in the muster room as we handed out their packs, which both surprised and affected them. They were so appreciative of the gesture.

“They told us they were ‘staring down the repeal of Title 42.’”

Title 42 is a Centers for Disease Control and Prevention order that was invoked in March 2020 under President Donald Trump to minimize the spread of COVID-19 by ensuring that only essential travel occurred at U.S. borders.

It directed that illegal immigrants could be quickly expelled back to Mexico as a pandemic precaution, rather than be processed under Title 8 immigration law, which is a much more protracted process inside the United States.

“We asked a commander what the repeal would mean to them,” Knox said, “and he told us, ‘It’s going to be total chaos down here.’

“‘They’re going to come over in greater numbers than we’ll be able to process in the time given us by law. If we pass that time, we have to release them. We took an oath to do this work, and we feel we can’t do our jobs because of the policies.’”

Knox paused and looked out the window of her office.

“I think they feel frustrated and demoralized. It’s like they were throwing up their hands, saying, ‘What are we supposed to do?’”

The agents Knox’s team spoke with specifically asked not to be identified.

“I felt privileged to deliver appreciation packs that included little things like beef jerky, granola bars, ChapStick, and a $25 gift card in each of them for local restaurants,” Knox said. “In each bag, there was a letter of appreciation to them, from us and all the Americans who made this happen.”

In time for Easter, the thank you letter reads, in part:

“We realize that the increased numbers at our border this year have meant additional work and extra burdens which test your resources and perseverance.

“With that in mind, we wanted to encourage you and let you know that there are untold numbers of citizens who appreciate your vigilance and integrity as you go beyond the normal expectations to meet the current need.

“Please accept these small tokens of our gratitude, respect, and honor for your service and sacrifice as you protect us, our families, and [our] communities.”