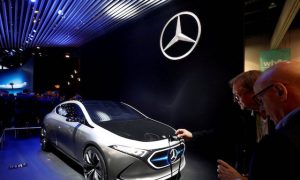 The logo of German car manufacturer Mercedes-Benz is rain covered at a car in Munich, Germany, on July 28, 2017. (AP Photo/Matthias Schrader)
Companies

FRANKFURT—Mercedes-Benz sold 2.31 million passenger cars last year, likely enough to make it the top-selling premium automotive brand in 2018, although some analysts are questioning how much longer German manufacturers can dominate the luxury car industry.

BMW, Audi, and Daimler-owned Mercedes-Benz have held sway in the market for high-performance limousines for decades, but analysts warn a shift toward electric and self-driving cars could open the door to new challengers, such as U.S. manufacturer Tesla.

“The question is whether Tesla is the Apple of the auto industry and the established premium brands will become the Nokias and Blackberries,” UBS analyst Patrick Hummel said, referring to Apple’s successful disruption of the mobile phone market, where Nokia and Blackberry once dominated.

BMW and Audi have yet to release annual sales data. Tesla said it delivered 245,240 vehicles in 2018.

The success of the German manufacturers is based on sales of combustion engined vehicles at a time when customers are hankering for newer electric cars with sophisticated software-based infotainment systems.

The Germans are also launching electric cars, but their profits come mainly from sales of high-horsepower diesel and petrol engined vehicles.

Mercedes-Benz posted a new sales record last year thanks to an 11 percent sales jump in China, the world’s largest car market, while sales in the United States and Europe fell 6.3 percent and 2.3 percent respectively.

Its flagship S-class saloon saw sales rise 12 percent, while more than a third of customers chose to buy a sport-utility vehicle (SUV), and around 25 percent of sales were compact cars, Mercedes-Benz said.

“In 2018 Mercedes-Benz was at the top of the premium segment in the automotive industry for the third year in a row,” Daimler Chief Executive Dieter Zetsche said on Jan. 8.

Analysts said the Stuttgart-based company remained ahead of BMW and Volkswagen-owned Audi thanks to increased production capacity in China.

“Mercedes currently has a significant lead over BMW and it is a two horse race for now. Audi will be behind for a number of years,” Nord LB analyst Frank Schwope said.

Hummel said Tesla could pose a threat in the medium term because it offers better connectivity and over-the-air updates.

“Tesla has a lead of three to four years in areas like software and electronics. The millennials are much more focused on these things. There is a risk that the Germans can’t catch up,” he said.