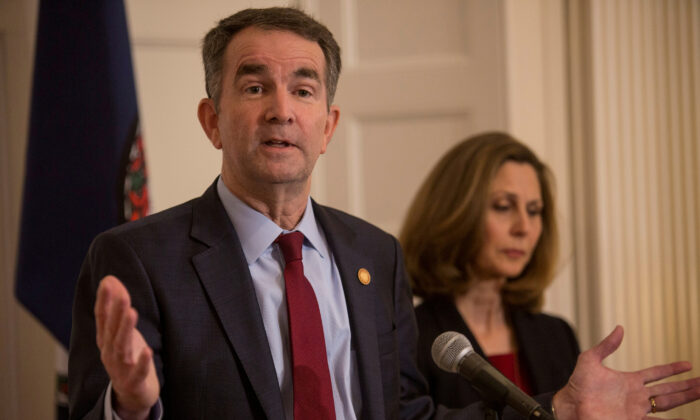 Virginia Gov. Ralph Northam, accompanied by his wife Pamela Northam, announces he will not resign during a news conference in Richmond, Va., on Feb. 2, 2019. (Jay Paul/Reuters)
US News

Some of the men who plotted to kidnap Michigan’s governor also talked about abducting Virginia Gov. Ralph Northam, an FBI agent testified on Tuesday.

Federal and state authorities charged 13 men, including members of a militia group called Wolverine Watchmen, with conspiracy and terrorism charges last week. The men face at least 20 years in prison; some face up to life if convicted.

During a planning meeting in Dublin, Ohio, in June, some of the suspects discussed targeting Northam, FBI special agent Richard Trask testified at a hearing in the U.S. District Court for the Western District of Michigan.

“At this meeting they discussed possible targets, taking a sitting governor, specifically issues with the governor of Michigan and Virginia based on the lockdown orders,” Trask said, basing his testimony on evidence from confidential informants, including encrypted communications from the group.

Both Northam and Michigan Gov. Gretchen Whitmer are Democrats who have imposed harsh restrictions amid the COVID-19 pandemic, fueling anger and frustration among some of their constituents.

The FBI gleaned from the group’s messages that one of the suspects had at one point suggested going to Whitmer’s house to “cap her,” possibly disguised as a pizza delivery man, Trask said. One suspect floated the idea of grabbing a pizza delivery person and taking his shirt in order to carry out the plan.

Trask penned the criminal complaint about the FBI’s probe into the groups, detailing how they held a series of meetings and trainings following the June meeting in Ohio before traveling to Whitmer’s vacation home to conduct reconnaissance and consider how best to kidnap her.

There was no mention of Northam in the complaint.

Northam’s press secretary, Alena Yarmosky, said in a statement to The Epoch Times that the FBI alerted key members of the governor’s security team throughout the course of their investigation.

“Per security protocols for highly-classified information, neither the Governor nor other members of his staff were informed. At no time was the Governor or his family in imminent danger. Enhanced security measures have been in place for Governor Northam and his family for quite some time, and they will remain,” she said.

The group at the meeting “talked about creating a society that followed the U.S. Bill of Rights and where they could be self-sufficient,” Trask wrote.

Whitmer has referred to the defendants as “sick and depraved,” expressing her hope that they are convicted.

“I have always felt safe, I am protected by the Michigan State Police, and they are an incredibly professional organization,” she said Sunday on CBS’ “Face the Nation.”

Whitmer’s emergency orders suffered another setback on Monday, when the state’s Supreme Court ruled to immediately cancel them because they were unconstitutional.