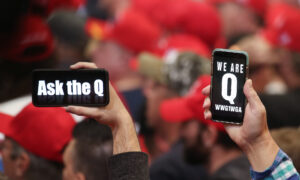 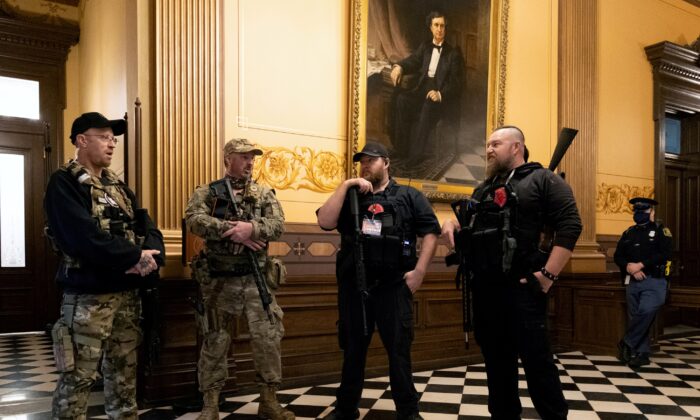 Members of a militia group, including Michael John Null and Willam Grant Null, right, who were charged on Oct. 8, 2020, for their involvement in a plot to kidnap the Michigan governor, attack the state Capitol Building, and incite violence, stand near the doors to the chamber in the capitol building before the vote on the extension of Gov. Gretchen Whitmer's emergency declaration/stay-at-home order in Lansing, Mich., April 30, 2020. (Seth Herald/Reuters)
US News

The Michigan militia that was named as playing a key role in the alleged plot to kidnap Gov. Gretchen Whitmer was a recently formed, low-key group that was motivated by Whitmer’s harsh executive orders issued in response to the COVID-19 pandemic, according to court documents and experts.

Seven members and associates of Wolverine Watchmen face state terrorism charges for allegedly participating in planning to abduct Whitmer from her vacation home and storm the State Capitol in Lansing.

According to affidavits from state detectives, Wolverine Watchmen is both anti-government and anti-law enforcement.

The group and its associates “have made terroristic threats towards government officials and organizations and provided material support for planned acts of terrorism,” detectives wrote. Leaders asked members to identify the home addresses of law enforcement officers, according to state and federal officials.

The seven men facing charges “are suspected to have attempted to identify the home addresses of law enforcement officers, in order to target them, made threats of violence intended to instigate a civil war and engaged in planning and training for an operation to attack the capitol building of Michigan and to kidnap government officials, including the governor of Michigan,” Michigan Attorney General Dana Nessel told reporters on Thursday.

While members did begin communicating late last year, the driving force behind the new group appeared to be the COVID-19 pandemic and Michigan’s response to it, Amy Cooter, a senior lecturer of sociology at Vanderbilt University who studies militias, told The Epoch Times.

“That in particular was the core event that encouraged them to form a group and apparently move into action,” she said.

Few members have known history in other militias. Two are said to have belonged to the Michigan Liberty Militia in the past.

That group and its founder took down their Facebook pages and don’t have publicly available contact information.

The lack of web presence for the Wolverine Watchmen led some to mistakenly link them to a site belonging to Michigan Militia Corps, Wolverines, another group. A spokesperson for that militia told The Epoch Times via email that the corps does not and has never had any affiliation with the Watchmen or any of its members.

“We do NOT advocate any of the alleged actions in which they have been accused. Although these Watchmen have also adopted the wolverine as their mascot, they have NO connection to MMCW,” the spokesperson said.

The Wolverine Watchmen “flew under the radar,” Jon Lewis, a research fellow at the Program on Extremism at George Washington University, told The Detroit News.

“This is simply not a big group that we’d ever heard of,” Lewis said. “I know anecdotally there are a lot of militia organizations operating both nationally and in Michigan, but this one has not popped up in our research.”

In March, a member concerned about the group’s plans agreed to become a spy for the FBI. The informant recorded phone calls and meetings that were used to bolster the charges.

Joseph Morrison and Pete Musico, two of the men facing state terrorism charges, are founding members of the group. Morrison is considered the militia’s “commander” and is known online as “Boogaloo Bunyan,” according to court documents.

Boogaloo is a loose network of groups and people who are preparing for a civil war. Their main outlook is anti-government and many are anarchists, according to researchers and government officials.

Wolverine Watchmen conducted tactical training this year at the home of Morrison and Musico and on private property in remote areas, “where they engaged in firearms training and tactical drills to prepare for the ‘boogaloo,’ a term referencing a violent uprising against the government or impending politically-motivated civil war,” one affidavit stated.

Members have different skills, including tactical prowess, medical knowledge, and weapons expertise. For instance, Paul Bellar, another member who was arrested, had expertise in medical and firearms training and designed tactical exercises, officials said.

According to federal officials, 15 men, including Michigan resident Adam Fox, met in Dublin, Ohio, on June 6 to discuss creating a self-sufficient society. Several proposed violent means to achieve such a society, including taking action against state governments.

The group decided they needed to increase the numbers and encouraged each other to talk to their neighbors and spread the message, according to a criminal complaint. As part of the outreach, Fox contacted Wolverine Watchmen.

After linking with Fox, members engaged in planning how to kidnap Whitmer, according to court documents.

According to the FBI informant, one of the militia’s founders told others on June 14 that he’d been introduced to Fox. That same day, members spoke with Fox over the phone. Members began meeting in person with Fox, including at a Second Amendment rally at the State Capitol in Lansing in June.

Fox, his girlfriend, and others attended one of the tactical trainings at the Munith residence later that month. The next month, Fox and others underwent training in Cambria, Wisconsin. They continued meeting and training at various locations, including at Fox’s workplace.

Shawn Fix, William Null, Michael Null, and Eric Molitor all aided in physical surveillance of Whitmer’s vacation home, from which the plotters wanted to kidnap her, state detectives said.

Molitor used his cell phone on Aug. 29 to find the home’s location and took photographs of the residence, according to an affidavit. He discussed with others about returning to conduct surveillance from water at a later date.

William and Michal Null allegedly served as lookouts for Fox and other participants during a nighttime physical surveillance operation.

“By pooling the skills of its members and providing training, the Wolverine Watchmen organization and its associates have provided training and expertise to materially support and provide resources to plan, prepare, carry out or facilitate acts of terrorism,” they wrote in court documents.

Fox, who faces federal charges, shared photographs of the surveillance operation to an encrypted chat group that included the FBI’s spy.

In the chat, another man who was charged on a federal level, Ty Garbin, offered to paint his boat black to support the water-based surveillance of Whitmer’s vacation home.

A group led by Fox drove to the vacation home in mid-September in three separate vehicles. Fox at one point got out of a car and inspected the underside of a highway bridge on the way for a place to seat an explosive charge, according to an FBI agent’s affidavit. During the night, they discussed the kidnapping operation.

“I can see several states takin’ their [expletive] tyrants. Everybody takes their tyrants,” Fox allegedly said, telling the others that Whitmer “has no checks and balances at all.”

Planning for the operation lasted into late September, according to court documents. Whitmer was kept abreast of the probe and she and her family were moved around as a result of the activities, Michigan’s attorney general said Friday.

Social media accounts and court documents show the men were animated the most by anti-government sentiment, with mixed feelings about President Donald Trump.

Videos showed at least one of the defendants identifying himself as an anarchist. Others reportedly recorded YouTube videos ranting against the government and singling out Whitmer for her policies.

“All of us in Michigan can disagree about politics, but those disagreements should never, ever amount to violence,” Matthew Schneider, U.S. attorney for the Eastern District of Michigan, said at a news conference announcing the charges.

“The alleged conspirators are extremists, who undertook a plot to kidnap a sitting governor,” Josh Hauxhurst, assistant special agent in charge, added.

At a separate briefing, Whitmer said she’s hoping the men are convicted, calling them “sick and depraved.”

“As a mom with two teenage daughters and three stepsons, my husband and I are eternally grateful to everyone who put themselves in harm’s way to keep our family safe,” she said.

According to the Anti-Defamation League, militia groups began to form in 1993. Within about two years, they had spread to almost every state.

Some 90 percent of militias have a defensive posture and are not prone to violence, Cooter, the militia researcher, told The Epoch Times.

“Most militia groups are, from their perspective at least, what we would call constitutionalists. They see it as their job to uphold the law, to take a defensive stance against the government but not an offensive one,” she said.

“The majority of them do not support this sort of action,” she added, referring to the allegations against the Wolverine Watchmen.

William Null, a co-founder of the Michigan Liberty Militia, who was charged by the state in the Whitmer plot, told WOOD-TV earlier this year that the group’s goal was to make sure everyone who wanted to could peacefully protest, including those who have different ideologies.

“Some of the events we’re at we don’t actually agree with, but as constitutionalists, you have the right to protest as long as you’re peaceful,” he said.

For many militia members, the gatherings are akin to a social club.

“They prioritize target shooting, kind of survival type skills, but they see themselves as needing to be prepared in case something bad happens, whether it’s a natural disaster, or, say, a riot in their town,” Cooter said.

Lee Miracle, coordinator for the Southeast Michigan Volunteer Militia, told The Epoch Times via email, “Our capacity for violence, as a free people, should always be well maintained, and kept within reach, but it should always be the LAST option.”

“Even with the intolerable behavior of our current governor, we must consider exhausting all of our peaceful options, we must give the system some sort of opportunity to run its course. There are mechanisms in place to check her dictatorial over reach. There are courts and petitions and even elections that must first be brought into play against her,” he added, noting the recent Michigan Supreme Court ruling against Whitmer’s wielding of emergency power.

“We are heartbroken that some of our fellow Michigan citizens may have been frustrated to the point of considering acts of violence. It is possible that these allegations stem from nothing more than idle chatter, born from months-long pandemic lockdowns and business closures,” Miracle said.

“Consider that each of the persons arrested is presumed innocent unless convicted, and that they, like everyone else, are entitled to due process.”