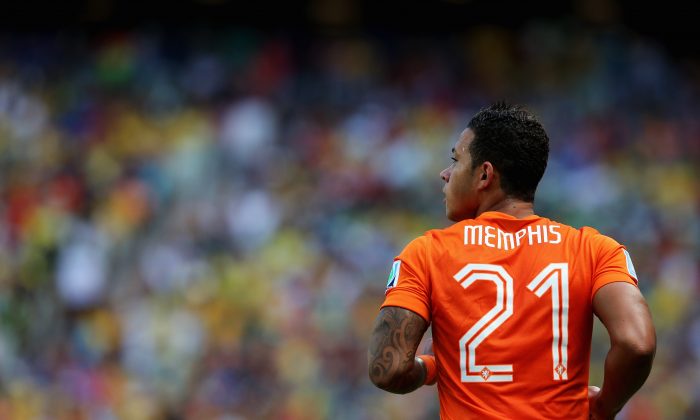 Memphis Depay of the Netherlands looks on during the 2014 FIFA World Cup Brazil Round of 16 match between Netherlands and Mexico at Castelao on June 29, 2014 in Fortaleza, Brazil. (Dean Mouhtaropoulos/Getty Images)
Soccer

Memphis Depay has been advised against moving away from the Dutch league next season by his manager.

Depay, 20, has attracted the interest of English clubs Manchester United and Tottenham Hotspur, but PSV boss Phillip Cocu has advised him against moving.

“No one has contacted us and he has a contract [until 2017] here so we should not get ahead of ourselves,” Cocu told Voetbal International.

“I let Memphis know that it would good for him to have another year here.

“He has only one full season behind him.

“I think you need a certain foundation before making the next step.

“That is independent of the qualities that a person has. Therefore, he must stay at PSV at least one more year.

“There is no concrete interest so I’m assuming he will report for pre-season training later.”

Cocu himself played in Holland until he was 27, before moving to Barcelona in 1998.