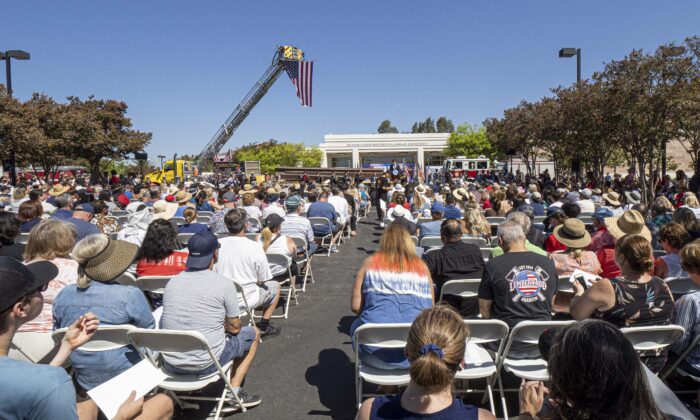 LOS ANGELES—It was an emotional day in Southern California and around the nation today, with multiple ceremonies marking the 20th anniversary of the September 11th terrorist attacks.

Two moments of silence were observed at the Los Angeles International Airport (LAX), where some passengers aboard three flights were headed at the time they crashed.

The airport’s pylons were glowing in red, white, and blue through Sunday morning. Airport officials said that over the past week, Los Angeles World Airports maintenance staff have cleaned and polished the airport’s 9/11 memorial “Recovering Equilibrium,” which is dedicated to the passengers and crew who died aboard the three flights bound for LAX and one bound for San Francisco.

The memorial, which is a 15-foot reflective stainless steel dish, was designed by artists BJ Krivanek and Joel Breaux and installed at the base of the Theme Building in 2003. It is meant to symbolize the feelings of loss and the need for public dialogue about the terrorist attacks, according to the airport.

“While New York, Pennsylvania, and Virginia bore the brunt of this horrific day two decades ago, Los Angeles was also deeply impacted by the loss of the passengers and crew on the three planes that were originally heading to LAX that morning,” said Justin Erbacci, CEO of Los Angeles World Airports, the city agency that manages LAX.

“We honor all of those who lost their lives and extend our thoughts to their families. The events of that day have shaped the evolution of aviation for 20 years, and we have never forgotten the victims or the lessons learned as we forged even stronger partnerships with law enforcement and the federal government to create the safest airports possible.”

The second plane used in the attacks, which hit the World Trade Center’s South Tower, was United Airlines Flight 175. It departed from Boston en route to LAX and hit the South Tower at 6:03 a.m. Pacific time. The third flight bound for LAX, American Airlines Flight 77, departed from Washington Dulles International Airport and hit the Pentagon at 6:37 a.m. California
time.

A fourth flight, United Flight 93, was bound for San Francisco International Airport from Newark Liberty International Airport. The flight’s intended target remains a mystery but is believed to be either the U.S. Capitol or the White House. The airplane crashed in a field near Shanksville,
Pennsylvania at 7:03 a.m. Pacific time.

A second moment of silence and a color guard ceremony was held at LAX inside the U.S. Customs and Border Protection Federal Inspection Station at Tom Bradley International Airport.

In downtown Los Angeles, thousands of volunteers gathered at the Convention Center to pack an estimated 200,000 meals for the Los Angeles Regional Food Bank. The event is in recognition of 9/11 being designated a National Day of Service. Organizers of the event said similar events were being held in 10 cities, with more than 2.5 million meals being packed for distribution to people in need nationwide.

“Honored & privileged to participate in the 9/11 National Day of Service, packing food for thousands of Angelenos in need,” Mayor Eric Garcetti tweeted. “This pandemic has taken its toll, but we’re continuing to lend a hand and #ShineALight in honor of those we lost, like so many did 20 years ago. #NeverForget.”

The Los Angeles Fire Department opted to cancel its annual in-person memorial ceremonies at fire stations due to the COVID-19 pandemic, although it welcomed the public to visit its 9/11 Memorial Fountain in front of Fire Station 88 at 5101 N. Sepulveda Blvd. in Sherman Oaks at any time to pay respects. The LAFD will hold a virtual remembrance event at 7 p.m., accessible at https://lafdheroes.com.

City Councilman Paul Koretz took part in a midday gathering at Los Angeles City Hall designed to serve as an educational event, teaching the significance of 9/11 to youth who weren’t alive when the attacks occurred.

In North Hollywood, City Councilman Paul Krekorian attended an event sponsored by the Los Angeles Beautification team. It included a tree-planting and candle-lighting at North Hollywood Park, the site of a plaque containing the names of Californians who died in the attacks.

In Malibu, meanwhile, nearly 3,000 flags were displayed on the campus of Pepperdine University in an annual tribute to those who died in the attacks.

Additional flags will also be in place honoring each country that lost a citizen. The university held ceremonies beginning at 5:30 a.m., featuring moments of silence, wreath-layings, and a screening of the film “United 93.”

The Beverly Hills Fire Department held a brief remembrance ceremony at its headquarters Saturday morning. The city was scheduled to hold a formal ceremony at its 9/11 Memorial Garden on Rexford Drive at 5:30 p.m., featuring a wreath-laying, bell-ringing, 21-gun salute, and a flyover.

In Pasadena, members of the city fire and police departments gathered at the Tournament of Roses’ Tournament House for a sunrise flag ceremony.

In Yorba Linda, the Richard Nixon Library and Museum held a commemoration ceremony centered on 23 tons of wreckage from the World Trade Center, which was brought to the library in a motorcade, escorted by the California Highway Patrol, Orange County Sheriff’s Department, and Orange County Fire Authority (OCFA).

The OCFA, meanwhile, held a remembrance ceremony at its Regional Fire Operations and Training Center in Irvine.