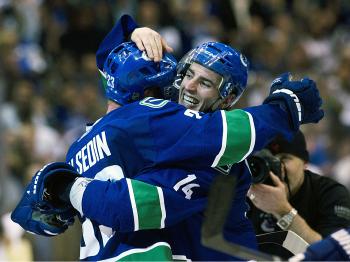 Henrik Sedin hugs Game 7 hero Alex Burrows who scored the overtime winner as the Vancouver Canucks advanced past the Chicago Blackhawks and into the second round. (Rich Lam/Getty Images)
Hockey

By Rahul Vaidyanath
Print
After the conclusion of the first round of the NHL playoffs on Wednesday, fans must be wondering what more can be offered to take things to the next level. It is almost hard to believe that after two weeks of action-packed playoff hockey, there are still three more rounds to be played before a Stanley Cup champion is crowned sometime in early June.

Four of the eight series went seven games. That hasn’t happened since 1995. Two of them went to Game 7 overtimes. The Nashville Predators won a playoff series for the first time in their franchise history that began in 1998.

Today’s NHL is all about parity. Anything can happen on any given day or in any given series. What made the first round of the NHL playoffs so memorable was some of the comebacks we witnessed.

I’d be curious to know what the winning percentage is for teams that have a multiple-goal lead after two periods; it’s probably around 99.9 percent.

So when the Washington Capitals trailed the New York Rangers 3–0 in Game 4 after two periods, it was probably safe to assume the series would be tied 2–2. Well, the Caps came back with three straight goals in the third and won it in double overtime after a gaffe by Rangers forward Marian Gaborik.

Describing the action of the night of that Caps win (Apr. 20) could be a column on its own as we witnessed the first two double overtime games. The Detroit Red Wings completed the sweep of the Phoenix Coyotes, and Buffalo’s Ryan Miller shut out the Philadelphia Flyers for the second time by a score of 1–0.

But the Caps don’t get the award for pulling off the biggest comeback. The San Jose Sharks stunned the hockey world, not to mention the Los Angeles Kings, in their 6–5 overtime win in Game 3. Trailing 4–0 early in the second period, San Jose tied the game 5–5 by the end of that same period.

The Philadelphia Flyers know a thing or two about comebacks after beating the Boston Bruins in seven games in last year’s second round. They had lost the first three games of the series but won the next four. They even trailed 3–0 in Game 7.

Against the Sabres, it was comeback time once again. After almost pulling off a three-goal come-from-behind win in Game 5, the Flyers found themselves down 3–2 in the series. One could say the Flyers had the Sabres right where they wanted them, as they took Game 6 in overtime and easily won Game 7 back in Philly.

Honourable mention goes to the Chicago Blackhawks who roared back from a 0–3 series deficit to win Games 4 and 5 by a combined score of 12–2 and forced a Game 7 before falling in overtime as Roberto Luongo rediscovered the form that made him one of the NHL’s great goalies.

The Tampa Bay Lightning with first-year owner, general manager, and head coach pulled off a terrific comeback of their own, beating the Pittsburgh Penguins in seven games after being down three games to one.

What is certainly notable about this series is Tampa Bay’s performances in Pittsburgh. After being shut out in Game 1, Tampa Bay roared back to a massive 5–1 win in Game 2.

In Game 5, down 3–1 in the series and back in Pittsburgh with their backs against the wall, the Lightning responded with an 8–2 victory.

Questioned for their shaky defence, Tampa Bay showed they know how to win the low-scoring games on the road under pressure with a 1–0 win in Game 7 in Pittsburgh. Fantastic stuff.

The NHL’s oldest rivalry more than lived up to its billing. Montreal opened surprisingly with two road wins in Boston before the Bruins roared back for three straight wins.

The comeback was almost completed by the Canadiens in Game 7. The Bruins jumped out to a quick 2–0 lead early in the first period before their lack of discipline got the better of them.

Yannick Weber got the Habs within one with a power play marker near the midway point of the first period. The Habs tied it up early in the second period with Tomas Plekanec’s short-handed goal.

After former Ottawa Senator Chris Kelly gave the Bruins a 3–2 lead in the third period, P.K. Subban came up with some heroics of his own. His power-play blast with less than two minutes to go set up a Game 7 overtime much like Chicago did to Vancouver Tuesday night.

But winning overtime games became something Boston did for a third time as Game 5 overtime hero Nathan Horton did his Subban impersonation, firing home a big slap shot for the series win.

Round 2 has a lot to live up to after everything we’ve witnessed in the first round. Hard to beat the NHL playoffs for sports entertainment value at this time of year.