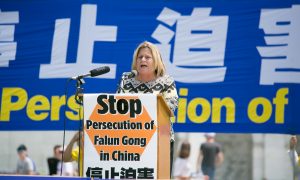 WASHINGTON—A bipartisan group of members of Congress and leaders of human rights organizations observed on Thursday an anniversary that communist China would prefer be ignored—the 15th year of the persecution of Falun Gong.

Hundreds of Falun Gong practitioners and supporters converged on the West Lawn of the Capitol to cheer speeches calling for an end to the persecution, which began on July 20, 1999.

The speakers honored the 3,769 practitioners confirmed killed by the regime. The true number who died from torture and abuse while being held in prisons, detention centers, labor camps, and brainwashing facilities is undoubtedly several times larger. In addition, researchers believe tens of thousands more have been murdered for their organs, which are used for transplantation.

The speakers also honored the millions of Falun Gong practitioners inside China for practicing “civil disobedience on a scale unprecedented in China’s history,” according to the Falun Dafa Information Center.

Congressman Sam Farr (D-Calif.) set the tone when he said:

“It has been estimated that many millions of individuals have been drawn to Falun Gong’s valued principles of truthfulness, compassion, and tolerance. These three principles are the enduring cornerstone of a democratic society. And yet … it is a travesty that Falun Gong practitioners have been persecuted and tortured, including heinous acts that are beyond comprehension.”

Congressman Blaine Luetkemeyer (R-Mo.) wrote a letter in support of the rally that said, “Adhering to a movement built upon peaceful principles, Falun Gong practitioners have responded to this persecution by staging non-violent protests and educating Chinese citizens on its beliefs and practices. However, those incarcerated members of Falun Gong are still subject to abuse and torture, including forced religious conversions, forced labor, and even organ harvesting.”

The unique nature of the Falun Gong persecution was observed by William J. Murray, chairman of the Religious Freedom Coalition, who was in China last year and talked to many Chinese.

Murray found some would criticize China’s past, particularly the Cultural Revolution, and China’s current one-child laws. “However, when I brought up the subject of the repression of Falun Gong, I was met with silence. The other subject no one wanted to talk about was [forced] organ harvesting from prisoners in China …”

Murray was dismayed that the Communist Party of China spends more time and resources to suppress “unregistered Christian churches and the Falun Gong than on the suppression of groups promoting violent jihad that has brought death to Tiananmen Square.”

The pressure to do something about the forced organ harvesting of Falun Gong adherents and other prisoners of conscience was mentioned often and by nearly all the speakers. In the House of Representations, Resolution 281 has garnered the “significant bipartisan support” of 182 cosponsors, said Congresswoman Ileana Ros-Lehtinen (R-Fla.).

The resolution condemns “the systematic, state-sanctioned organ harvesting from non-consenting prisoners of conscience in the People’s Republic of China.” It was introduced by Ros-Lehtinen and her colleague former Congressman Robert Andrews (D-N.J.).

Ros-Lehtinen said H. Res. 281 calls for China to immediately end the practice of organ harvesting of all prisoners, particularly Falun Gong, and it calls for a full and transparent investigation by the State Department.

Last year, the advocacy group Doctors Against Forced Organ Harvesting delivered to the U.N.’s High Commissioner for Human Rights a petition with 1.5 million signatures calling for an investigation into China’s killing of prisoners of conscience for the sale of their organs.

Congressman Aaron Schock (R-Ill.) wrote a letter to the rally that was read aloud. “These [organ harvesting] practices violate every tenet of human rights imaginable, and I am proud to have cosponsored this bipartisan resolution.”

Wang Zhiyuan, the spokesperson of WOIPFG (World Organization to Investigate the Persecution of Falun Gong) said at the rally, “All transplant surgeons are suspects of live organ harvesting of Falun Gong practitioners.”

Wang said that WOIPFG publicizes evidence of crimes of the CCP and the responsible individuals to one day bring them to justice. WOIPFG has issued over 5,000 notices of investigation and published 251 investigative reports, and will soon “release a partial list of individuals suspected of participating in the organ harvesting of Falun Gong practitioners.”

Two Congressmen, Chris Smith (R-N.J.) and Dana Rohrabacher (D-Calif.) placed the 15-year persecution in the wider context of history in the grand sense. Smith couldn’t make it to the podium because he had to be at Congress for a vote, but his speech was read aloud:

“The brutal campaign to eradicate the Falun Gong from China is one of the greatest shames of the last two decades. Every year you assemble in Washington to remind us of this crime against humanity. …What kind of country murders, tortures, imprisons peaceful individuals seeking enlightenment in meditation and health? Can we trust such a country as an ally? As a security partner? As a trusted partner in trade? Of course the answer is ‘no.'”

Rohrabacher said, “The fact is communism is in the ashes of history … all it did was oppress millions of people. … Decent people have to step up and say communism is wrong, it didn’t work. It was a nightmare, rather than a dream. … It’s time for all of us to respect the human rights of every person on this planet, and that is especially true of religious believers.”

Dan Fefferman, president, International Coalition for Religious Freedom, said communist ideology views human beings as merely “matter in motion.” But human beings are spiritual beings with creativity, freedom, and will and these qualities do not come from matter. “They come from the spirit. And so, when people who adhere to a materialistic ideology cling to power, they naturally fear a movement that exposes that ideology as evil and false.”

In 2013 the Chinese regime launched a new three-year national campaign to “transform” Falun Gong practitioners—to force them to give up their beliefs. Practitioners are now being sent to detention facilities that are often called “legal education centers” by officials, and “brainwashing” centers by human rights activists.

“The subjection of practitioners to forced conversions and reeducation camps is deeply discouraging,” wrote Congressman Bill Foster (D-Ill.) in a letter of support for the rally.

Sen. Robert Menendez (N.J.) said in a letter to the rally read by his Research and Legislative Assistant Terrell Henry, that he had introduced a resolution in the last Congress calling for an end to the efforts in China to “‘transform Falun Gong practitioners by coercing them into renouncing their practice.”

Faith McDonnell, director of religious liberty programs at the Institute on Religion and Democracy, observed that the day the rally, July 17, was World Day for International Justice. “What better day to condemn the criminal injustices of the Chinese Communist Party and demand justice for Falun Gong practitioners, Christians, and others who are persecuted by that unjust regime.”

Former White House senior advisor in the George W. Bush administration, Bob Baltazar, drew upon his Haitian roots and his ancestors enduring persecutions. He said, “It is often those who have acted out of conscience rather than convenience who have made this world a better place.”

Suzanne Scholte, president, Defense Forum Foundation, suggested that maybe we haven’t done enough. “The fact that we are here today shows the failure of the United States and the rest of the world to pressure China to end these horrific atrocities against human life,” she said.

Chloe Schwenke, a representative from Freedom House, a well-known organization whose mission is the global expansion of democracy, wants China to begin a new path. “This rally has been held every year since 2001, and will continue to be held as long as necessary to remind everyone that the world is watching, and is holding accountable all who are responsible for this ongoing and inexcusable outrage.