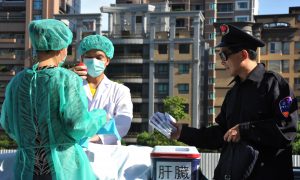 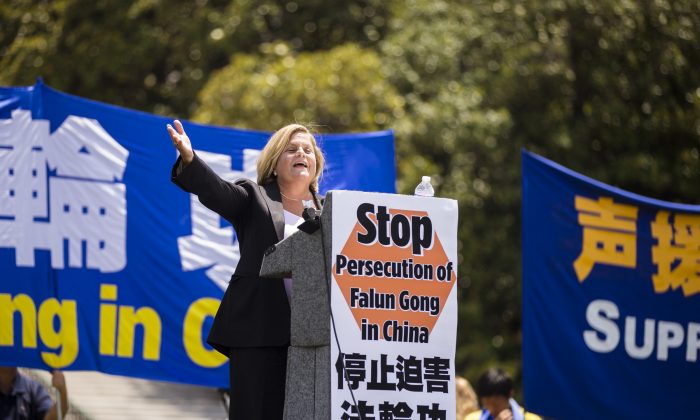 WASHINGTON—On the West Lawn of the U.S. Capitol, the annual rally protesting the 16 yearslong persecution of Falun Gong in communist China received an unusual infusion of hope. Minutes before the rally began at noon on July 16, some two dozen youth from 15 countries were on stage after just completing a 3,000-mile, cross-country bike ride to raise awareness of the persecution and how it is impacting children.

“We, who are so blessed to have the freedom of speech and freedom of belief, need to speak up for those without a voice and without the right to believe,” said team leader Annie Chen.

The sacrifice displayed by the youth gave encouragement to the protesters and speakers, who included several members of Congress and officials from prominent human rights and faith organizations.

Each of the four congressmen and women had a special message to impart.

Rep. Ileana Ros-Lehtinen (R-Fla.) told the crowd of several hundred Falun Gong demonstrators, “Falun Gong practitioners are peaceful, compassionate, and tolerant individuals who should be respected for their beliefs, instead of being mercilessly persecuted by the communist tyrants in Beijing.”

Ros-Lehtinen said that she has proudly introduced House Resolution 343 (H.Res.343), which expresses “concern for the systematic and state-sanctioned organ harvesting from non-consenting prisoners of conscience on the People’s Republic of China.”

She said the resolution has already gathered significant bipartisan support.

Rep. Dana Rohrabacher (R-Calif.) told the protesters that they have an important role to play that goes far beyond themselves, namely, “reminding our country what we stand for.” It goes beyond making money, although there is nothing wrong with making money, he said. “The values of our Founding Fathers went beyond free enterprises,” he said, involving the profound issues of liberty and justice.

“The President of the United States should not sit with a leader from China without reminding him that we consider that the oppression of you and fellow believers, because you are the ones who are the victims, but it is the United States that must stand with you or else there are no victims anywhere in the world that [would have hope],” Rohrabacher said.

Rep. Ted Poe (R-Texas) said that the right to believe and practice one’s faith is a basic human right and nothing is more important than that.

From what I know about Jiang, he needs to be in jail, not Falun Gong.
— Congressman Ted Poe (R-Texas)

Poe commented on signs that protesters held regarding bringing China’s former Party leader Jiang Zemin to justice. This call resonated with Poe, who said that before he was a congressman, he was a judge. He said, “From what I know about Jiang, he needs to be in jail, not Falun Gong.”

The fourth congressman, Rep. Keith Rothfus (R-Pa.), had a message for the communist leaders of China.

Thirteen members of the House of Representatives sent letters of support to the rally. Sen. Patrick Toomey (R-Pa.) sent a proclamation in support of Falun Gong that was dated the day of the rally.

Some of the speakers paused to pay tribute to the way practitioners have responded to the oppression.

Alan Adler, executive director of Friends of Falun Gong USA, said the former Chinese communist leader Jiang Zemin underestimated Falun Gong adherents when he launched the persecutory campaign at the peaceful group. The people practicing Falun Gong had not only been studying the principles of truthfulness, compassion and forbearance, they had been putting these into practice.

“Although Jiang thought the massive pressure brought to bear by the CCP … would cause them to give up the practice, he did not understand that with enough forbearance, one can endure the unendurable and that the Falun Gong practitioners would never give up.”

“I have such admiration for you. You really are a sort of light shining in the darkness. And by the dignified, the courageousness, and the unyielding way in which you have responded to the terror unleased on you, you truly are a model and an example to all the world.”

Margaux Ewen, representing Reporters Without Borders USA, admired the journalists who challenge the Chinese Communist Party. “China is the country with the most journalists and bloggers in prison,” she said.

[Former communist leader Jiang] did not understand that with enough forbearance, one can endure the unendurable and that the Falun Gong practitioners would never give up.
— Alan Adler, executive director, Friends of Falun Gong USA

Since the last rally in 2014, there have been hopeful signs that the ferocity of the persecution is waning.

Calingaert noted that more lawyers in China are taking up Falun Gong persecution cases, villagers are signing petitions calling for the release of their neighbors brutalized for their faith in Falun Gong, and that there are even cases “where security personnel are refusing to arrest Falun Gong practitioners because they understand how unjust this is.”

Hopeful also was Yi Rong, president of the Tuidang Center, which facilitates renunciations from the Chinese Communist Party. She said that more than 209 million Chinese people have renounced, or quit, as registered in their online platform. “In the past 10 years, the Tuidang movement has represented Chinese people’s hope for freedom, for a better future, and for a new China without the CCP,” she said.

Suzanne Scholte, president of the Defense Forum Foundation, was gratified by the developments in China. “It is very encouraging to see that over 60,000 Falun Gong practitioners and their family members have filed criminal complaints against Jiang Zemin, in less than two months,” she said.

Faith McDonnell, director of Religious Liberty Programs at Institute on Religion and Democracy, and Courtney Doucet, of Jubilee Campaign USA, commended both the Tuidang movement and the lodging of criminal complaints against Jiang. Dan Fefferman, from the International Coalition for Religious Freedom, also was encouraged by the 60,000 legal complaints that have been filed in Chinese courts.

At one point during her speech, Doucet seemed to vocalize what was on the minds of everyone present. “A year from now when we are gathered again,” she said, “my hope and prayer is that we will be celebrating the end of persecution in China.”