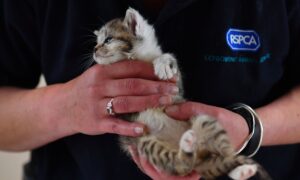 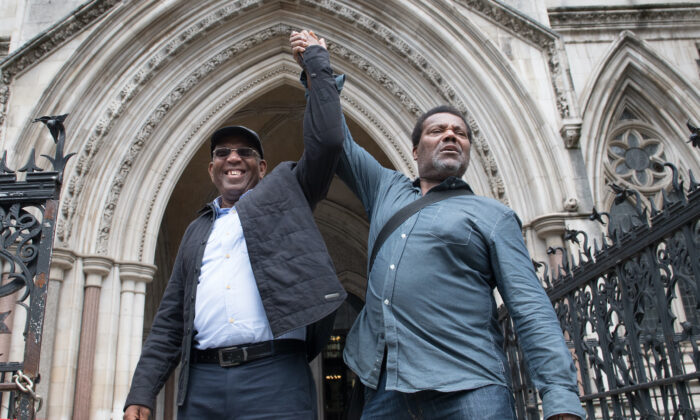 Paul Green (left) and Cleveland Davidson outside the Royal Courts of Justice in London, on July 6, 2021. (Stefan Rousseau/PA)
UK

Member of the Stockwell Six ‘Vindicated’ After 1972 Conviction Overturned

A member of the “Stockwell Six,” who was jailed on the word of a corrupt police officer nearly 50 years ago, has said he has finally been vindicated after his name was cleared by the Court of Appeal.

Cleveland Davidson was just 17 when he and five friends, all young black men, were arrested on the London Underground while on a night out on February 18, 1972.

The Stockwell Six were accused of trying to rob British Transport Police officer Detective Sergeant Derek Ridgewell, who was in plain clothes and had previously served in the South Rhodesian, now Zimbabwean, police force.

Ridgewell claimed the six, who got on the train at Stockwell station in south London, attempted to rob him before he fought back and arrested them with a team of undercover officers.

They all pleaded not guilty, but all bar one were convicted and sent to jail or borstal, despite telling jurors that police officers had lied and subjected them to violence and threats.

Davidson, now 66, was convicted of attempted robbery and sentenced to six months’ detention.

On Tuesday, three members of the Stockwell Six—Davidson, Paul Green, also now 66, and Courtney Harriot—finally had their names cleared by the Court of Appeal, which ruled that their convictions were unsafe.

Sir Julian Flaux, sitting with Justice Linden and Justice Wall, said: “It is most unfortunate that it has taken nearly 50 years to rectify the injustice suffered by these appellants.”

The two remaining members of the Stockwell Six who were convicted, Texo Joseph Johnson and Ronald De’Souza, have not yet been traced.

But the Criminal Cases Review Commission (CCRC), which referred the convictions to the Court of Appeal, said it is “desperate to find other men who were part of this group of friends so many years ago.”

Speaking outside the Royal Courts of Justice in London after the hearing, Davidson said: “It’s vindication that we were innocent at the time. We were only young then, we did nothing.”

“It was a total stitch-up, it was a frame-up for nothing,” he added.

Davidson said Ridgewell was a “corrupt and wicked and evil police officer,” adding: “We don’t know how many other people Ridgewell stitched up … it’s just endless.”

He said his conviction had affected him for the last five decades and “ruined” his life.

Winston Trew, whose 1972 conviction for attempted theft and assaulting police was overturned by the Court of Appeal in December 2019, said after the hearing that he was “very pleased.”

Trew was also “fitted up” by Ridgewell and was jailed for two years, later reduced to eight months on appeal.

His book, Black For A Cause … Not Just Because. … which detailed Ridgewell’s long history of “fit-ups” was used in a previous appeal to overturn another conviction based on the corrupt officer’s evidence.

Trew told the PA news agency: “My research has been vindicated.

He said Davidson, Green, and Harriot had been put through “50 years of torture.”

“They were convicted as young men going out for a night out and they spent the next 40-odd years with a shadow hanging over their lives,” he added.

CCRC chairwoman Helen Pitcher said: “We are delighted that these three men have, quite rightly, had their appeals quashed in court today, which is long overdue.

“Our attention now turns to the two men we have been trying to reach for some time now who were also wrongly accused many years ago.”

“We are desperate to find other men who were part of this group of friends so many years ago.

“They too were convicted. By tracking them down we can take another step towards achieving justice and finally clear their names.”

British Transport Police Deputy Chief Constable Adrian Hanstock said: “It is wholly regrettable that the criminal actions of a discredited former officer of this force over four decades ago led to these unsound prosecutions.

“I apologise unreservedly for the distress, anxiety, and impact this will have undoubtedly caused those who were wrongly convicted.

“We understand that nothing can ever make up for the period of time that they spent in custody or the longer-term effect it may have had on them.”

But he added that having “examined all available records” of investigations where Ridgewell was the principal officer, the force “have not identified any additional matters that we feel should be referred for external review.”

Ridgewell was involved in a number of high-profile and controversial cases in the early 1970s, culminating in the 1973 acquittals of the “Tottenham Court Road Two”—two young Jesuits studying at Oxford University.

He was then moved into a department investigating mailbag theft, where he joined up with two criminals with whom he split the profits of stolen mailbags.

Ridgewell was eventually caught and jailed for seven years, dying of a heart attack in prison in 1982 at the age of 37.

The case of the Stockwell Six is the third time Ridgewell’s corruption has led to wrongful convictions being overturned by the Court of Appeal.

In January 2018, Stephen Simmons’ 1976 conviction for stealing mailbags was quashed after he discovered Ridgewell was jailed for a similar offence just two years after his own conviction.

In December 2019, three members of the “Oval Four”—who were arrested at Oval Underground station in 1972 and accused by Ridgewell’s “mugging squad” of stealing handbags—also had their convictions overturned.

Trew, Sterling Christie, and George Griffiths were all sentenced to two years, later reduced to eight months on appeal, following a five-week trial at the Old Bailey.

In March 2020, the final member of the Oval Four, Constantine “Omar” Boucher, also had his name cleared, prompting calls for a “wholesale review” of all cases linked to Ridgewell.