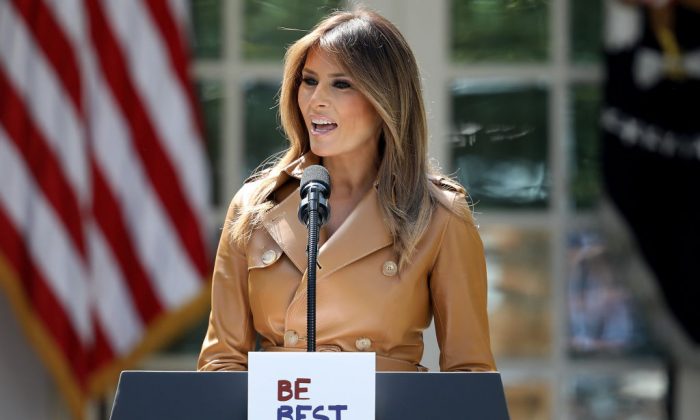 U.S. First Lady Melania Trump speaks in the Rose Garden of the White House on May 7. (Win McNamee/Getty Images)
US

First Lady Melania Trump unveiled her official platform from the White House’s Rose Garden on May 7, focusing on the welfare of children.

The unveiling is significant as it marks the first time Trump has officially laid out her formal policy goals as the first lady. Previously she had worked on combating a range of issues such as cyberbullying, neonatal opioid effects, social inclusion, and internet safety.

Her campaign, dubbed “Be Best,” will help to combat issues facing children today and will include three main pillars centered on well-being, social media use, and opioid abuse.

Her campaign will work to promote the people, organizations, and programs that are helping children overcome these issues.

President Donald Trump, also at the event, helped sign a proclamation declaring the day Be Best Day, in honor of the first lady’s new platform.

Earlier at the event, the president made remarks acknowledging the first lady’s role during the past year. Melania Trump has visited schools, hospitals, and families who were dealing with the effects of the opioid epidemic.

“Melania, your care and compassion for our nation’s children, and I have to say this, and I say to you all the time, inspires us all,” the president said. “Everywhere she has gone, Americans have been touched by her sincerity, moved by her grace, and lifted by her love.”

A recent CNN/SSRS poll reflects the president’s comments, showing the first lady has experienced a significant surge in support from both women and Democrats.

Fifty-seven percent said they now have a favorable impression of the first lady.

We should strive to provide kids with the tools they need to cultivate their social and emotional health.
— Melania Trump, first lady

“It remains our generation’s moral imperative to take responsibility and help our children manage the many issues they are facing today, including encouraging positive social, emotional, and physical habits,” Melania Trump said. “By acknowledging there are many important issues, and knowing these problems cannot be solved overnight, I believe we can change the way we think and talk about issues facing children today.”

Also joining the first lady in the announcement were children who had written to her and whom she met during her first year. She asked some of them to stand up during her speech, as audiences applauded in return, at the packed event.

Melania Trump has always shown interest in helping children. Just last month she turned the Blue Room at the White House into a classroom and invited middle-school students to discuss the thoughts and issues that they face.

The first lady herself has a 12-year-old son, Barron Trump.

Last year in September, Melania Trump addressed the United Nations and called for world leaders to “step up” and help children in need. In the speech she discussed countries suffering from poverty, trafficking, disease, illiteracy, and drug issues, adding that children were “hit first and hardest.”

“No child should ever feel hungry, stalked, frightened, terrorized, bullied, isolated, or afraid, with nowhere to turn,” the first lady said last year. “We need to step up, come together, and ensure that our children’s future is bright.”