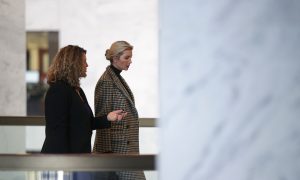 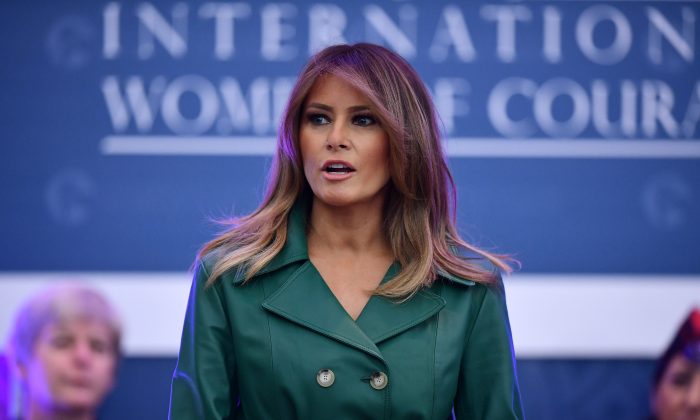 First Lady Melania Trump recognized 10 women from across the globe in this year’s International Women of Courage Awards hosted by the U.S. State Department, where she emphasized the importance of courage.

Joining Secretary of State Mike Pompeo on March 7 to confer the awards, Trump noted the record number of female lawmakers in Washington and the historic unemployment levels for women—the lowest level in 65 years.

“This is something to celebrate,” Trump told the crowd, as she also made reference to the 2 million more women working today than in November 2016.

Since 2007, the State Department has recognized more than 120 women from more than 65 different countries “who have demonstrated exceptional courage and leadership.” The first lady emphasized the importance of courage, describing it as an act of selflessness, at the annual ceremony.

“I believe courage is one of the qualities we need most in society,” she said in her opening remarks. “Courage is what divides those who only talk about change from those who actually act to change. Courage takes sacrifice, bravery, and humility—it is the ability to put others first.”

She called the 10 women “role models to the next generation.”

“The women we are honoring today are symbols of courage,” said Trump. “They are human-rights advocates in some of the most dangerous of parts of our world … These courageous women nurture and serve the lives of the vulnerable and forgotten within their communities.”

Razia Sultana, one of the women awarded at the event, has devoted her career to advancing human rights for the people of Burma. Born in Maungdaw, Burma, in 1973 to ethnic Rohingya parents, Sultana has worked directly with the Rohingya, particularly women and girls, since 2014.

Sultana advocates for the Rohingya through practicing law, and conducts research and educational programs specializing in trauma, mass rape, and the trafficking of Rohingya women and girls.

She documented systematic sexual violence by Burmese security forces against the Rohingya in two reports “Witness to Horror” and “Rape by Command” and has interviewed hundreds of Rohingya refugees in Bangladesh.

Although Sultana has always identified as a Rohingya, she said as a human-rights activist, she believes in the rights and justice for all in Burma as a means to bring peace.

Moumina Houssein Darar, a recipient from Djibouti, is the lead investigator for high-profile investigations, especially anti-terrorism cases, in the Djiboutian National Police Force. Her work has led to the conviction and/or deportation of numerous al-Shabaab terrorists and has thwarted several attempted terrorist attacks after the 2014 La Chaumiere bombing in Djibouti City.

Col. Khalida Khalaf Hanna al-Twal, Chief of the Public Security Directorate’s Women’s Police Department, from Jordan, was honored for her efforts in refugee affairs, security, and the Syrian crisis. She serves as one of the highest-ranking women in Jordan’s security services and has been recognized for her work on sensitive cases, including with victims of domestic, physical, social, and sexual violence.