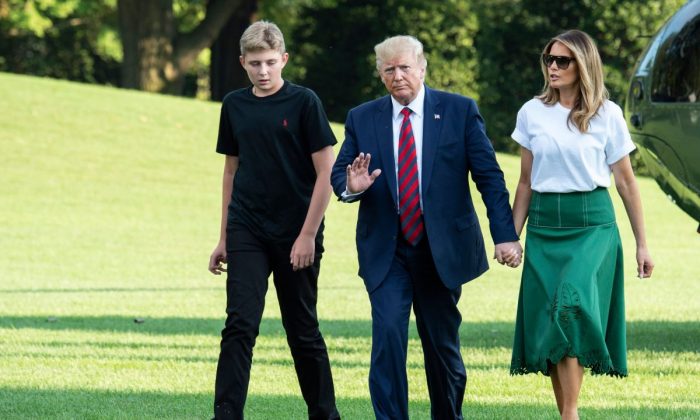 First Lady Melania Trump’s office announced she is canceling a planned appearance at a Pennsylvania campaign rally with her husband, President Donald Trump, due to a lingering cough in the wake of her CCP virus diagnosis.

Her chief of staff, Stephanie Grisham, confirmed the update to news outlets on Tuesday.

Grisham said that the first lady “continues to feel better every day following her recovery from COVID-19, but with a lingering cough, and out of an abundance of caution, she will not be traveling today.”

Earlier in October, President Trump and Melania Trump announced they both tested positive and later negative for the virus. The president was hospitalized for several days at Walter Reed hospital after his diagnosis.

Tuesday’s campaign rally in Erie, Pennsylvania, would have been Melania Trump’s first in-person campaign rally appearance in more than a year. She attended August’s Republican National Convention speech at the White House.

The first lady wrote an essay last week talking about her family’s experience with the virus while announcing that Barron, their son, contracted the CCP virus but suffered no symptoms.

After Trump’s negative diagnosis, he has adopted a full schedule, sometimes holding several campaign rallies per day as Election Day closes in. Melania has stayed out of the public’s view during his campaigning, although President Trump’s other children—Ivanka, Eric, and Donald Jr.—have played active roles in his campaign.

“I experienced body aches, a cough and headaches, and felt extremely tired most of the time. I chose to go a more natural route in terms of medicine, opting more for vitamins and healthy food,” Melania said in the essay last week.

“We had wonderful caretakers around us and we will be forever grateful for the medical care and professional discretion we received from Dr. Conley and his team. It was an unfamiliar feeling for me to be the patient instead of a person trying to encourage our nation to stay healthy and safe,” she said.

“Along with this good news, I want people to know that I understand just how fortunate my family is to have received the kind of care that we did. If you are sick, or if you have a loved one who is sick—I am thinking of you and will be thinking of you every day,” Melania added. “I pray for our country and I pray for everyone who is grappling with COVID-19 and any other illnesses or challenges.”