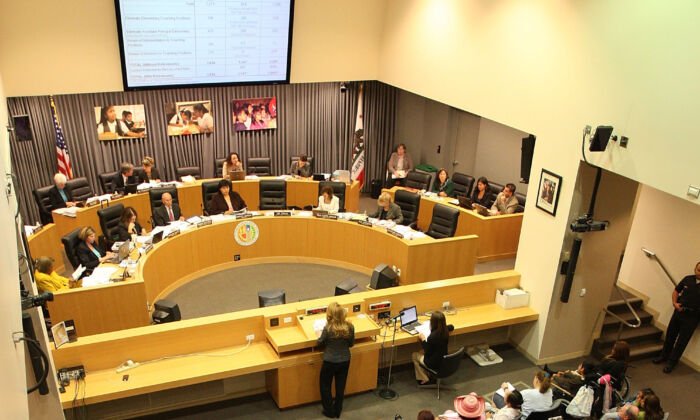 A file photo of a meeting of the Los Angeles Unified School District Board of Education in Los Angeles on April 14, 2009. (David McNew/Getty Images)
Southern California

Three of the seven seats on the Los Angeles Unified School District’s (LAUSD) Board of Education are up for grabs in this year’s election which comes at a pivotal moment for the school district amid declining enrollment.

Here is an overview of who is running:

LAUSD parent and candidate Rocio Rivas, who is currently a policy researcher for LAUSD District 5 boardmember Jackie Goldberg, has a long list of endorsements from education leaders—including the district’s teachers’ union, Goldberg, and District 3 board member Scott Schmerelson.

Rivas supports the district’s Fall 2022 COVID-19 vaccine mandate, environmental justice programs, and those that focus on African American student achievement and LGBTQ+ student equity, according to her campaign website.

The teacher’s union endorsement means Rivas’ campaign is likely to receive donations from the organization.

Candidate Maria Brenes, also an LAUSD parent, is the director of InnerCity Struggle, an advocacy and family services group based in Boyle Heights.

Her goal is to boost academic performance and “strengthen traditional neighborhood schools to be hubs of academic excellence … in highest need communities,” according to education blog LA School Report.

Brenes is endorsed by Service Employees International Union (SEIU) 99, a union for school workers like bus drivers and custodians as well as the LA County Federation of Labor, which represents approximately 800,000.

The other two candidates for District 2 are Miguel Segura and Erica Vilardi-Espinoza.

Vilardi-Espinoza, an accountant and education representative on the Los Feliz Neighborhood Councilwoman, told the LA School Report she would focus on developing an engaging curriculum, expanding technology, Wi-Fi access for all students, and updating school buildings.

Candidate Segura says he will focus, if elected, on schools in low-income areas.

Segura previously served as community engagement director to the LAUSD Board of Education and on the staff of former San Gabriel Valley area Assemblyman Ed Chau. He also worked, in various capacities on both Hillary Clinton’s 2016 and Joe Biden’s 2020 presidential campaigns.

So far, none of the candidates for District 2 have reported any campaign contributions through December 31, 2021, the last available date for data.

District 4, which spans from Canoga Park and Reseda to West Hollywood, Venice Beach, and Marina Del Rey, is also opening up this year.

Incumbent Nick Melvoin is running for re-election and has nearly $350,000 in campaign contributions through December 31, 2021.

Melvoin has also received about $500,000 from businessman and charter proponent Bill Bloomfield through an independent group called “Kids First.”

Meloin won his seat in 2017 with the backing of charter schools, though this time around, he also has the support of education worker union SEIU 99.

Running to unseat Melvoin are Gentille Barkhordarian, who according to city filings is an electrical engineer and a parent, and 20-year LAUSD teacher Raissa White, who has raised $22,000 for her campaign through Dec. 31.

Another contender is Tracy Schroeder, who has also taught LAUSD students for more than 20 years.

Schroeder was among the teachers who voiced opposition to the board’s decision to fire hundreds of unvaccinated staff members.

Melvoin and White are the only candidates in this district to report any donations through December 31, 2021.

Board President Kelly Gonez is the District 6 incumbent and her re-election campaign has currently raised $200,000.

If re-elected, Gonez says her priorities for her new term would include expanding universal preschool and high-quality early education, incorporating equity into all LA Unified policies, and increasing college and career readiness for all students, according to her campaign website.

Candidate Jess Arana, an LAUSD high school wrestling coach and LA Police Department sergeant, has raised $33,315 for his campaign, gathering the support of some police officers and police groups.

Arana wants to reform campus security, noting that the rate of violent incidents in the LAUSD was up 21 percent in 2021 from 2018, according to his campaign website.