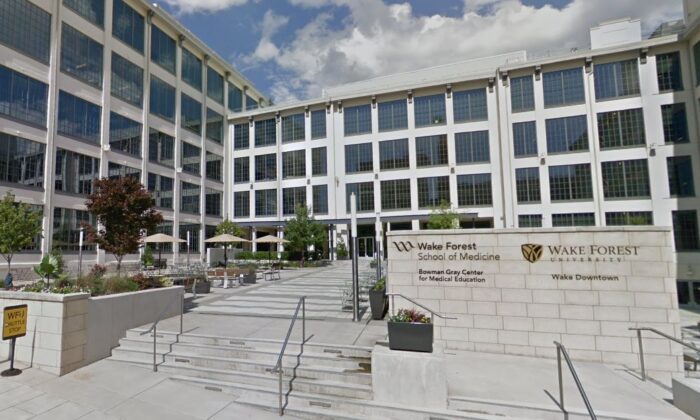 Wake Forest University School of Medicine in a file image. (Screenshot via Google Maps)
US News

A North Carolina medical school has placed on leave a student who said she purposefully missed a vein of a patient because the patient mocked her pronoun pin.

The Wake Forest University School of Medicine said in a statement to news outlets that it placed Kychelle Del Rosario, a fourth-year student, on a leave of absence because of an “inappropriate and misleading post.”

Del Rosario had posted on Twitter in March that she hurt a patient on purpose.

“I had a patient I was doing a blood draw on see my pronoun pin and loudly laugh to the staff, ‘She/Her? Well of course it is! What other pronouns even are there? It?’ I missed his vein so he had to get stuck twice,” she wrote.

A screenshot was shared with Wake Forest’s medical school, with the user saying it sounded like “bad practice or even abusive behavior” by Del Rosario.

“Thank you for bringing this to our attention. This student’s tweet does not reflect how Wake Forest University School of Medicine treats patients and provides patient care. We are taking measures to address this with the student,” the school said.

In its update, the school said all student encounters with patients are documented. The documentation for the blood draw in question showed Del Rosario “was unsuccessful in obtaining the blood draw.”

After that, she “appropriately deferred a second attempt to one of our certified professionals” and “did not attempt to draw blood again,” the school added.

The choice of punishment drew criticism from some, who encouraged boycotting the school.

Del Rosario, who is still listed as a planner for the upcoming Southern Trans Health and Wellness Conference, issued a statement through the school.

“For the event mentioned in the tweet, I was performing a blood draw on a patient and during our conversation they had shown dismay at my pronoun pin. I calmly shared my thoughts about pronouns and did not escalate the situation further. When I was doing the blood draw, I missed the first time due to my inexperience as a student, and per our policy, my supervisor performed the successful blood draw the second time. During this encounter, I never intended to harm the patient,” she said.

“I am truly sorry for poorly representing our school and our health system. I will reflect on responsible social media use as a professional and my duty to care for all my patients, regardless of any differences of belief.”