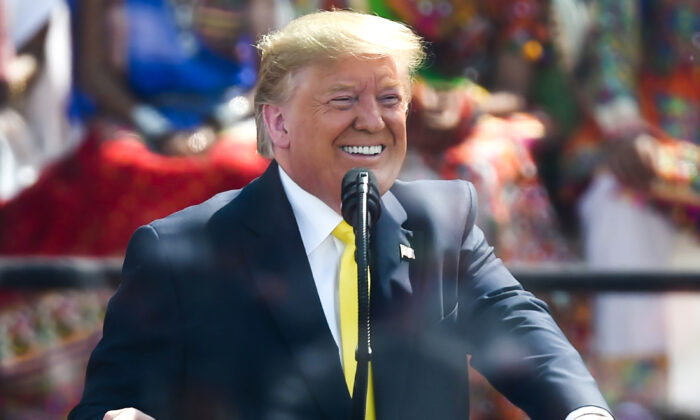 Media Serves Up Comedy in Effort to Get Trump

I don’t believe that President Donald Trump has ever deployed the Twitteresque acronym “ROFLMAO” (rolling on the floor, laughing my ass off). But I know that he appreciates the sentiment because of something he said in February 2018.

At that time, at the apex of Robert Mueller’s Excellent Adventure, Trump observed that people were “laughing their asses off in Moscow” at the malevolent Keystone Cops antics of the Get Trump Brigade.

“If it was the GOAL of Russia to create discord, disruption, and chaos within the U.S.,” the president observed, “then, with all of the Committee Hearings, Investigations and Party hatred, they have succeeded beyond their wildest dreams.”

That was—and is—exactly right, as was his follow-on observation: “I never said Russia did not meddle in the election, I said ‘it may be Russia, or China or another country or group, or it may be a 400-pound genius sitting in bed and playing with his computer.’ The Russian ‘hoax’ was that the Trump campaign colluded with Russia—it never did!”

But not, of course, the end of the comedy.

As Andrew McCarthy wrote Feb. 22 in National Review, the sentencing of Roger Stone last week represented the conclusion of the Trump–Russia Fantasia “Part I.”

Yes, that’s right, Part I. And despite the flop of that melodrama, the studio is already gearing up for Part II.

The first installment strained credulity but at least had the virtue of novelty. Imagine, a real-life Manchurian candidate, right before our eyes!

Of course, it was totally unbelievable, not least because it wasn’t true. But just as people wept bitter tears over Charles Dickens’s decision to kill off Little Nell, so people got hysterical over the idea that somehow Trump had “colluded” with Russia to steal the election from its rightful owner, Hillary Clinton.

In the sequel, we are asked to follow S.T. Coleridge and undertake a gigantic “willing suspension of disbelief.” For The New York Times, it was the work of a moment. In a breathless story published Feb. 20, our former paper of record reported on a “classified briefing” by members of “the intelligence community” to the House Intelligence Committee. The burden of the briefing, according to “five [unnamed] people familiar with the matter,” was that Russia is once again up to its old meddling tricks and is “interfering in the 2020 campaign to try to get President Trump re-elected.”

You see what I mean about ROFLMAO. As McCarthy noted, we are “asked to believe that Putin is manipulating the chesspieces to steal a second term for President Trump—somehow preferring an incumbent who beefs up the U.S. armed forces, pressures NATO allies to beef up theirs, imposes painful sanctions on Moscow, provides lethal aid to Ukraine, ramps up U.S. energy production, and seeks to thwart the Kremlin’s coveted natural-gas partnership with Germany.”

Deep waters, what? McCarthy is right. “It’s a lunatic plot.” But the mainstream media went with it big time, much to the amusement of Tucker Carlson, who provided a hilarious compilation of Russia 3.0 hysteria. I pause for a commercial break while you enjoy the clip.

Are you back? Big news! The Washington Post, though listening in to the same broadcast, got a different message. According to WaPo, Russia was indeed interfering in the 2020 primary—but in order to help Bernie Sanders, not Trump!

“U.S. officials have told Sen. Bernie Sanders that Russia is attempting to help his presidential campaign as part of an effort to interfere with the Democratic contest, according to people familiar with the matter.”

I give you those italics free and for nothing. I wonder if those “people familiar with the matter” were the same five unnamed sources that The New York Times consulted? If so, some reporters need a hearing aid or we are dealing with “sources” that have a sense of humor, like the Russian comedians who led Rep. Adam Schiff (D-Calif.) on a wild goose chase.

The truth of the matter was underscored by a story in The New York Post.

“US intelligence officials reportedly believe the Kremlin is attempting to manipulate both sides of the upcoming presidential election—boosting Bernie Sanders and President Trump.” In other words, it is just as Trump said in 2018. Russia’s goal is to “create discord, disruption and chaos within the U.S.” What better way than to use media, social and the other kind, to support all the major candidates, turning everyone against everyone else. ROF, as I say, LMAO.

In closing, I’d like to come back to the beginning of that NY Times story. The briefing in question was classified, the substance of which was leaked to the press.

I understand that the United States now keeps two sets of laws, one for Democrats, another for Republicans (just ask Roger Stone or Gen. Mike Flynn). But still, there is the little matter of 18 U.S. Code 798, which deals with the unauthorized “disclosure of classified information.”

I looked through the statute, and there was no mention of the usual two-tiered application according to which Democrats (which includes virtually all members of the press) and Republicans are to be treated differently. As far as I could see, it applies to everyone equally. (A novel idea these days, I know.) And I note that persons found guilty of the unauthorized disclosure of classified information “shall be fined under this title or imprisoned not more than ten years, or both.”

The cavalier attitude of the NY Times and the Post about breaking such laws suggests that I am wrong about its not being one of those two-tiered statutes. Probably, it is. But still, sticklers might object. So, I have a suggestion to forestall future embarrassment in case some busybody wonders why it is OK for some people to leak classified information but not OK if certain others do it.

It is a time- and labor-saving expedient. Instead of having deep-state operatives leak classified information to the press, why not simply invite the sympathetic (i.e., left-wing) press to sit in on the classified briefings? That way, venues such as the NY Times and Post won’t be put to the inconvenience of having to wait for someone to leak the rumors and innuendos to them. They’ll have them firsthand.

In the meantime, it will be interesting to see how Russia 3.0 fares at the box office. The opening weekend, from all I can tell, was pretty dismal. What happens with this entertainment will probably depend on what competing acts the media comes up with to divert us.