Media Give Trump Most Negative Presidential Coverage in 25 Years

Only 5 percent of news reports are positive, according to Pew Research Center 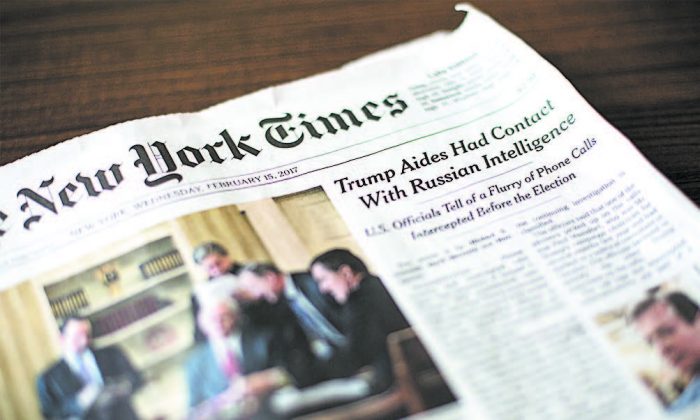 Claims by President Donald Trump that media organizations primarily report negatively on him were proven true by new research by Pew Research Center.

Five topics dominated the news coverage, making up two-thirds, during the time period evaluated by the Pew Research Center, from Jan. 21 to April 30.

Since Trump won the presidency in November, much of the media coverage has sought to question the legitimacy of his presidency, creating divisions in society. Most media organizations reported extensively on the allegations of collusion between the Trump campaign and the Russian government.

However, many of the stories relied heavily on anonymous sources from within the intelligence community, resulting in frequent erroneous reporting.

Secretary of State Rex Tillerson responded to a story published by NBC News on Oct. 4 that claimed Tillerson had considered resigning.

Tillerson told reporters at an unscheduled press briefing that the story was false and that he had never considered resigning. He also accused media organizations of trying to divide people.

“This is what I don’t understand about Washington. I’m not from this place. But the places I come from, we don’t deal with that kind of petty nonsense. It is intended to do nothing but to divide people. I’m just not going to be part of this effort to divide this administration,” Tillerson said.

Trump also called out NBC News for the article, writing on Twitter that “Rex Tillerson never threatened to resign. This is Fake News put out by @NBCNews.”

Rex Tillerson never threatened to resign. This is Fake News put out by @NBCNews. Low news and reporting standards. No verification from me.

White House press secretary Sarah Sanders said on Oct. 5 that with the freedoms of the First Amendment also come responsibilities.

“You have a responsibility to tell the truth, to be accurate,” Sanders told reporters in response to a question about the issue.

“We’ve seen recent information that says that only 5 percent of media coverage has been positive about this president and this administration, while at the same time you have the stock market and economic confidence at an all-time high,” she said.

“Frankly, those are the issues most Americans care about—not a lot of the things that you cover, not a lot of the petty palace intrigue that you spend your time on. I think that we need to move towards a certainly more fair, more accurate, and, frankly, a more responsible news media for the American people.”