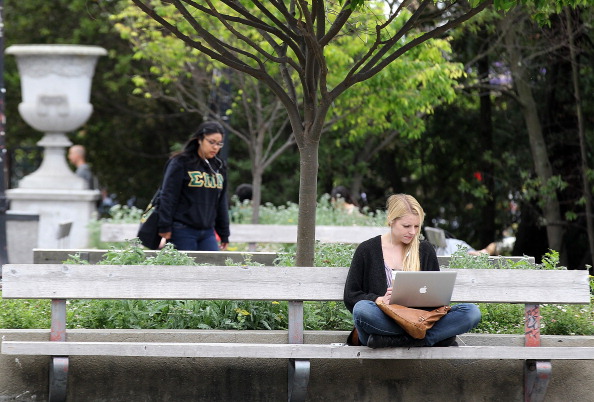 A college student using a laptop on a college campus in California. The proposed Student Right to Know Before You Go Act would put in place federal legislation that would call on colleges and universities to track their graduates data in employment after education. (Justin Sullivan/Getty Images)
US

Measuring the Success of Higher Education

College is a major investment for young adults and their families, and with the rising cost of higher education, the decision becomes ever more critical in planning one’s future.

Graduating with $125,000 in student debt limits job options, according to Florida’s Republican Sen. Marco Rubio. The legislator is cosponsoring a bipartisan education bill with Oregon Democratic Sen. Ron Wyden that seeks further transparency in measuring the successes of college and university programs.

“When it comes to higher learning, too many students and families are in the dark,” Sen. Wyden said in a press release. “The cost of a four-year degree can now run north of $100,000 and students deserve to know before they matriculate what they can expect from their huge investment in money and time. The data exists.”

The aim of the Student Right to Know Before You Go Act is to collect return-on-investment data on college programs and make that data available in an informative way. One example is to provide the employment status of students after graduating college based on choice of major.

Other data would provide credit accumulation, rates of remedial enrollment, average cost of a program before and after financial aid, and total accumulated debt. Data would be collected and disseminated at the state level.

Both Wyden and Rubio spoke on accountability in education in a panel discussion held at the American Enterprise Institute (AEI) last month.

Rubio emphasized that in addition to individual tuition costs, the federal government has a stake in education transparency, as it invests in students through Pell Grants and subsidized loans.

He also added that data collected could show students that good investments are close at hand. “A lot of kids are going to find out that some of the best bargains are in their own backyard,” Rubio said at AEI, emphasizing community colleges and private institutions’ contributions to the labor force.

Lynn O’Shaughnessy is a college expert, consultant and speaker, and author of “The College Solution.” O’Shaughnessy said that since the federal government has already passed a piece of legislation requiring all schools that participate in federal financial aid programs to put a net price calculator on their website, adding data on results of investment would make sense as well.

“I don’t see why schools shouldn’t be transparent with the academic side,” said O’Shaughnessy. “They should be doing a good job of seeing where there kids end up after they graduate from their school and very little actually track what happens to their graduates.”

Some schools do a good job tracking former students. According to O’Shaughnessy, St. Olaf in Minnesota has a “return on investment” link on their webpage that includes a class of 2011 detailed employment report. Individual student information is left out, but employer, full-time or part-time status, major, and salary data is available.

For colleges like California Polytechnic State University, a search for “career survey” on their site reveals information on student numbers for full-time and part-time employment, graduate studies, seeking and not seeking employment, types of jobs former students now have, their major, and salary since graduating.

“That is what all schools should be doing,” O’Shaughnessy said.