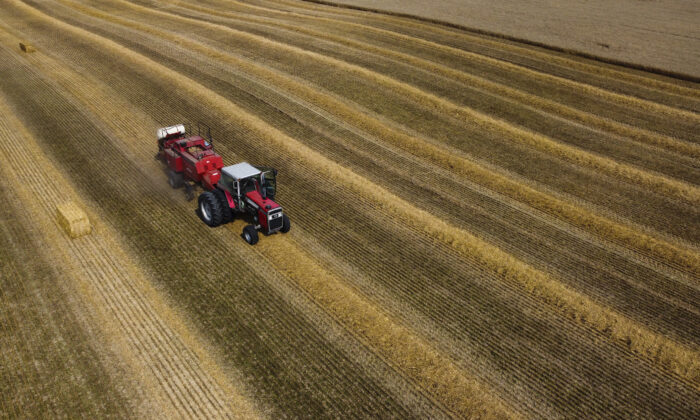 A farmer crops a field in Mississippi Mills, Ont., on Aug 10, 2021, in this photo taken using a drone. (The Canadian Press/Sean Kilpatrick)
Canada

Measuring greenhouse gas emissions (GHGs) caused by using synthetic nitrogen fertilizer is a tedious and unreliable process that will exponentially raise the cost of growing crops—which will inevitably be passed on to consumers, say farmers in Northern Ontario.

The Epoch Times spoke with several farmers in the region who expressed concern about adhering to the federal government’s proposed fertilizer emissions targets.

“You can measure ammonia losses. There is an instrument that can do it, but it’s not very reliable or very accurate—definitely not on a large field scale,” he told The Epoch Times.

The federal government’s current climate plan outlines a target to reach net-zero national emissions by 2050, which includes reducing nitrogen emissions associated with fertilizer usage by 30 percent below 2020 levels by 2030.

The Department of Agriculture and Agri-Food Canada (AAFC) has maintained that the target will remain voluntary and is not intended to directly reduce “fertilizer use.”

“It is intended to be achieved while maintaining or improving yields,” said the AAFC in a previous email to The Epoch Times. “The goal is to maximize efficiency, optimize fertilizer use, encourage innovation, and to work collaboratively with the agriculture sector.”

The government’s climate plan also says that finding ways to reduce fertilizer emissions “will save farmers money and time” and “will result in more resilient production systems.”

“Farmers by nature … are not looking to waste money or be wasteful in product or inputs,” he said.

“There is room for improvement, as far as placing fertilizer in the right spot, at the right time, and that sort of thing,” Brennan said. “But I don’t think that value is 30 percent.”

“Products are going to get more and more expensive,” Smith said. “It’s going to be you that pays.”

Stephanie Vanthof, a member service representative for the Ontario Federation of Agriculture (OFA), agreed there is a “challenge around the measurement of fertilizer emissions.”

“We don’t have a great way to measure it at this point,” Vanthof said. “The easiest thing to measure is fertilizer use.”

Vanthof said researchers can “roughly” measure the volume of emissions but “don’t necessarily have a great way of measuring reductions in emissions compared to that baseline.”

“Which is why I think there’s some fear,” she said. “If we can’t accurately measure all that, the easiest thing is to go to fertilizer use.”

‘Don’t Have Enough Connection to Agriculture’

The AAFC in its email said that “emissions from agriculture accounted for 10% of total GHG emissions for Canada in 2020″ and that the government decided upon its 30 percent reduction target “based on available scientific research and internal analysis.”

“While developing the target, the Government of Canada also accounted for variations in factors such as soil type, soil humidity, climate and crop types across the country, which have an impact on emissions reduction potential,” said the AAFC.

Brennan called the 30 percent target “a number grabbed out of thin air.”

“I don’t know anybody or anything that says that there is a 30 percent sleeve there that we should be able to tighten down or tighten up,” he said. “I don’t know where that number comes from.”

“They’re pushing numbers and saying, ‘This is where we need to be,’ but without understanding the practicality of getting to them,” Mooney said. “That’s the biggest issue.”

The AAFC invited farmers to send feedback on the emissions reduction target through a “discussion document” open from April until the end of August 2022.

The AAFC said it would use the document’s responses to develop a strategy to meet the target, but did not specify if the target itself was in question.

“Now the question will be whether they actually listen to [feedback] or if this will allow them to say, ‘well, we asked for comment,'” said Mooney.

Besides the reduction target, Mooney said farmers are already having a difficult time affording fertilizer because its price has “almost doubled this year.”

“So everybody’s using the minimum amount they can to get by,” he said

Smith owns about 300 acres of farmland, 200 of which he uses to grow crops every year. This spring, he bought 3 tons of fertilizer for his crops and the price was over $4,000 in total.

Smith said the cost of fertilizer is now forcing farmers to use less—regardless of whether it will affect their production.

“When it’s that expensive, it has to go pretty far,” he said.

Mack Emiry, a retired farmer who used to work at the family-owned Emiry Farm, said there was a total of 700 acres of crop-growing land on the property, which requires almost 10 times more fertilizer than Smith’s farm.

“I can’t exactly say the tonnage off the top of my head, but there would be no question somewhere between 20 and 30 tons of commercial fertilizers purchased in a year,” said Emiry.

Mooney said reducing fertilizer emissions and usage will simply require farmers to use more land, which, in turn, requires more fuel and less efficient land use.

“If you start not using as much [fertilizer], then your land becomes not as productive,” Mooney said. “Then you’ve got to till more land. And when you’re tilling more land, what are you doing? You’re using more fuel.”

The price of land far outweighs that of fertilizer, said Brennan, who pointed out that farmland in certain areas of Southern Ontario costs tens of thousands of dollars per acre.

“You want to make every acre you’ve got or every animal you’ve got produce as much as it can,” he said.

Brennan questions if the government will enforce the emissions reduction target in the coming years to ensure cooperation from farmers.

“If there’s a 30 percent reduction in fertilizer that is mandated, where does it end? Does it become 40 percent the next year, or 50 percent in five years?” said Brennan.