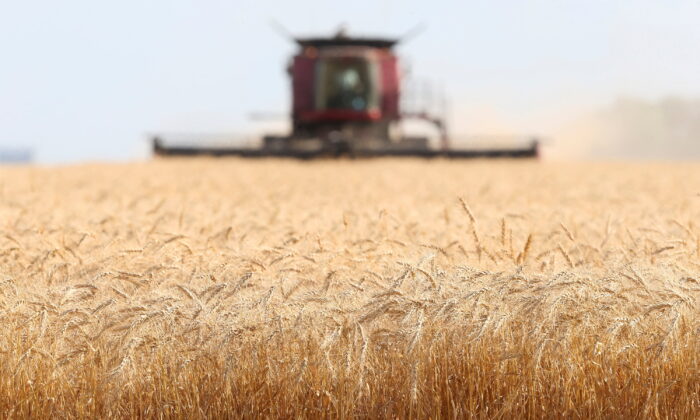 Spring wheat is harvested on a farm near Beausejour, Manitoba, on Aug. 20, 2020. (Shannon VanRaes/Reuters)
Canada

Over 70% of Farmers Say Forced Fertilizer Reductions Would Cause Food Shortages, Study Finds

A recent poll has found that 72 percent of farmers say the Liberal government’s plan to reduce fertilizer emissions by 30 percent will cause their crop yields and food production to plunge if the target is implemented.

The farmers were polled in a study conducted by the Canadian Federation of Independent Business (CFIB) and released in June 2022.

Taylor Brown, a CFIB policy analyst who contributed to the study, surveyed what Canadian farmers think of the emissions reduction plan—which also calls for large-scale fertilizer cutbacks—introduced by the Trudeau government in 2020.

Working alongside CFIB Vice-President of National Affairs Jasmin Guénette, Brown found that almost three-quarters of the 361 farmers surveyed, who were also CFIB members, said that a mandated reduction of nitrogen emissions would reduce both crop yields and overall food production.

“Our [members] are worried,” Brown told The Epoch Times.

“They know that any sort of reduction in fertilizer would decrease profitability, decrease their amount of yield, and they’re facing additional rising costs and labour shortages right now.”

“Some farmers are wondering how they’ll continue feeding Canadians, as well as the world,” she said.

The CFIB, a not-for-profit business advocacy organization, called on the Canadian government in Brown and Guénette’s report to rework its future emissions reduction plan in a way that will accommodate the livelihood of Canadian farmers.

“Farmers can be part of the solution, not the problem, in Canada’s environmental plan,” said the report.

In its climate plan, “A Healthy Environment and a Healthy Economy,” the federal government said it aims to reduce national emissions from fertilizers by 30 percent “below 2020 levels.”

The government also said that “direct emissions” from the use of synthetic fertilizer have increased by 60 percent over the last 15 years and are “projected to keep increasing.”

“Improving how fertilizers are used through better products and practices will save farmers money and time, and help protect Canada’s land and water,” reads the climate plan.

The Department of Agriculture and Agri-Food Canada (AAFC) told The Epoch Times in an email that 2020’s fertilizer emissions were equivalent to “11.82 megatonnes of carbon dioxide.”

“The fertilizer [reduction] target was established based on available scientific research and internal analysis which pointed to the potential of optimizing nitrogen fertilizer use with an accompanying reduction in greenhouse gas emissions, while maintaining or increasing yield,” said the AAFC.

The 30 percent emissions reduction target is currently optional, but the proposed climate plan—if passed—will require Canadians coast-to-coast to adjust their habits to meet the target.

“[That’s] another red flag for us,” said Brown. “Any sort of broad, sweeping initiative is of concern.”

Brown pointed out that “nitrous oxide emissions vary wildly” province-by-province and said that a federal mandate to reduce emissions equally across the country won’t properly address the issue at hand.

“In the west, as we know—it’s a big agricultural-productivity area—we’re actually seeing that, per acre, they’re not releasing that much nitrous oxide emissions,” Brown said. “However, in the east, it’s totally different. So we’re wanting a better, less broad initiative going forward.”

CFIB reported that more than half of the businesses and farmers surveyed said that mandatory emissions reductions would harm the profitability of their agricultural businesses. Over 40 percent said they’ve already reduced their emissions rates and further reductions would be “challenging” because they’ve already limited their nitrogen fertilizer use.

“Nearly half of our members say that they’ve already optimized the nitrogen fertilizer use,” said Brown. “And they’ve done this by conservation tillage, soil testing, rotating in nitrogen-fixing crops, and using the 4-R nutrient stewardship.”

Brown said that farmers have been finding new ways to reduce their nitrogen emissions for the last 15 years and that the government’s looming mandate has many farmers worried, particularly in light of widespread farmer protests in Europe in response to similar policies enacted there.

“We’re seeing the aggressive emission targets in Europe, and you can see the Dutch farmers protesting because they know that their yields will just be absolutely trash,” said Brown. “[Canadian] farmers are concerned—seeing what’s happening in Europe—that that could translate into what’s going to happen with this initiative.”

‘Costs Will Just Continue to Rise’

Canadians who rely on healthy crop production for stocked grocery-store shelves will also feel the effects of a fertilizer emissions reduction should it become mandatory, Brown said.

“[Consumers] would definitely be seeing that on their bottom line,” she said. “Because with less product available, demand is still the same, and costs will just continue to rise.”

“I myself spent over $5 dollars on a sweet potato the other day,” Brown said. “And it’s alarming, to be honest. You have to think about people who can’t afford to [buy groceries], and they’re going to fast food places and getting some of that food instead of having a healthy meal at home from the local farmers.”

With both farmers and consumers at risk, Brown said CFIB is focused on appealing to the government to keep the emissions reduction target voluntary.

“We’ve been reassured by our federal counterparts that the hope is to keep this voluntary, and they are focusing on emissions and not actual hard nitrogen fertilizer reduction,” she said.

“However, there should be concern that if farmers are forced to reduce their nitrogen fertilizer use, there will be a reduction in yield, that will mean higher consumer costs and just the cost of doing business overall for farmers.”