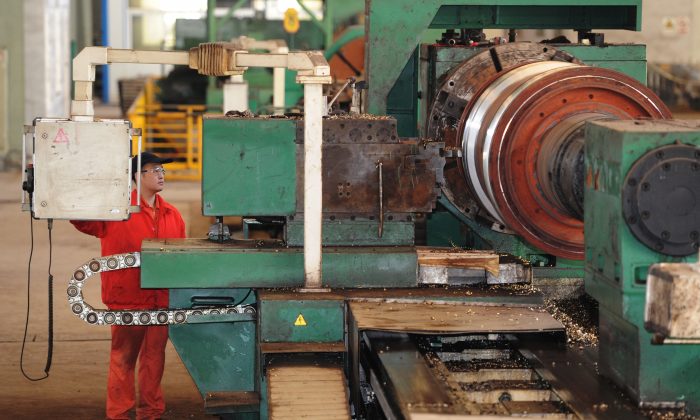 BEIJING—China’s factories likely struggled to grow for a second straight month in November as cooling demand at home and the threat of higher U.S. tariffs stifled new orders, a Reuters poll showed, adding to risks facing the global economy.

The official survey on Nov. 30 will offer the first clues on the health of China’s vast manufacturing sector this month, a day ahead of high-stakes talks between U.S. and Chinese leaders which will determine the future of the countries’ trade war.

Exporters in China have been hit by fresh U.S. tariffs on about $200 billion of Chinese products since late September, and Washington has threatened to sharply hike duties on Jan. 1 unless Beijing accedes to a wide range of demands to correct what Washington describes as “unfair” trade practices.

The official manufacturing Purchasing Managers’ Index (PMI) for November is expected to come in at 50.2, just above the neutral mark of 50, despite increased government investment in infrastructure and export subsidies, according to the median forecast of 38 economists in a Reuters poll.

That would mark the second month of only marginal expansion, after growth hit a 27-month low of 50.2 in October.

Economists surveyed appeared more pessimistic, with the most downbeat forecast dropping to 49.8 from 50.3 last month. The 50-mark divides expansion from contraction on a monthly basis.

“More recently, we have picked up some signs indicating further downside for corporate and government cash flow growth, as the downward trend has become more pronounced for asset prices and producer price inflation (PPI),” analysts from China International Corporation (CICC) wrote in a report on Wednesday.

A private survey—the Caixin/Markit Manufacturing Purchasing Managers’ index (PMI), which focuses more on small and mid-sized firms—is expected to show growth stalled in November, dipping to 50 from 50.1 in October.

Activity in China was already starting to cool before the trade dispute heated up, with a regulatory crackdown on riskier lending and debt making it harder for companies to obtain credit and raising their borrowing costs.

Exports have been surprisingly resilient as shippers rush out goods to beat U.S. tariffs, but orders have been slumping for months, raising the risk of a sharp drop soon if the U.S. raises tariffs as planned.

China’s supply chains are being snarled, and some companies are weighing moving production offshore to cheaper locations, anecdotal reports show.

Profit growth at China’s industrial firms cooled for a sixth straight month in October as factory prices and sales softened amid uncertainties stemming from the trade dispute.

A weak factory reading would reinforce the consensus view that China’s policymakers will roll out more support and stimulus measures soon on top of a raft of recent initiatives.

Weak October credit data suggested companies are in no mood to make fresh investments as business conditions deteriorate, leaving more of the heavy lifting to government spending, which will take time to kick in.

The economy grew by a slower-than-expected 6.5 percent in the third quarter, its weakest pace since the global crisis.

The official PMI survey is due out on Nov. 30, along with a sister survey on services. The Caixin manufacturing PMI will come out on Dec. 3 and its services PMI on Dec. 5.