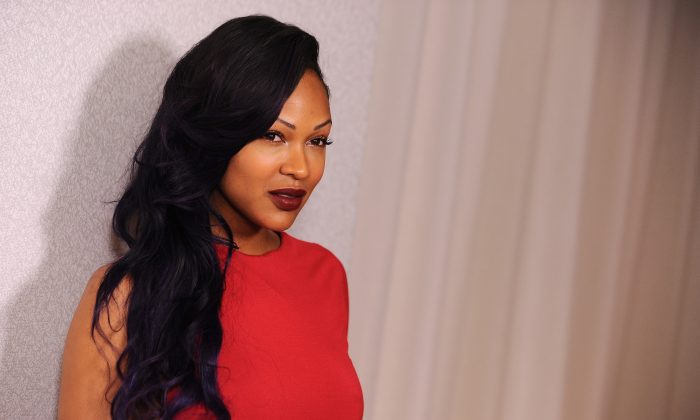 Meagan Good arrives at the InStyle Summer Soiree at the Mondrian Hotel on Wednesday, August 14, 2013 in Los Angeles. (Photo by Jordan Strauss/Invision/AP)
Entertainment

Meagan Good: Actress Says Leaked Pictures Are Real, ‘You Should be Ashamed’

Actress Meagan Good appears to be one of the increasing number of victims of the widespread nude photos hack.

Naked pictures of Good appeared online on Sunday after rumors about the pictures circulated on Saturday.

At least four pictures that appear to show Good are being distributed online. She is topless in all of them.

Good, 33, is an actress best known for roles in films such as “Think Like a Man” and “Anchorman 2: The Legend Continues.”

She’s been married to DeVon Franklin, a Sony Pictures executive, since 2012.

While Good hasn’t appeared nude in any films, she often describes herself as “a sexy Christian” and has expressed willingness to do so.

“If Angelina Jolie goes topless, everyone goes ‘Wow, she’s so badass, so committed to her craft,’ ” Good told Rolling Out in a previous interview.

“But if Halle Berry goes topless, everyone’s like ‘She’s a slut. She probably took a bunch of money to do that.’ People attack her with unsavory names. And it’s unfortunate. Halle is one my favorite actresses — I’ve looked up to her since I began this journey. There’s definitely a double standard but I can’t put my finger on exactly why that is. If someone is telling a story, they should go to whatever extent that they’re comfortable with to tell the story. Whatever they feel is necessary.”

She added about personal nudity:

“I have no problem with nudity — it just has to not be exploitative and it has to be important to tell the story,” she explains. “It depends on the script, the character, the story, the tone of the movie — all of those things. I commend women of every nationality that are bold enough to tell a story in a way that’s fearless. I just haven’t found a project where I felt it was necessary to do that. The scenes I’ve come across seemed exploitative and I just didn’t do it.”

Good reacted to the leak, which has caused her name and several related terms such as “Meagan leaked” to trend on Twitter, one of the websites where the pictures are circulating.

“I’m definitely in shock … saddened for everyone who is experiencing this,” she said in a photo posted on Instagram.

“Oh yeah and for everyone who’s reposting the leaked nudes? You should be ashamed of yourself,” she added. “You have a blessed day now.”