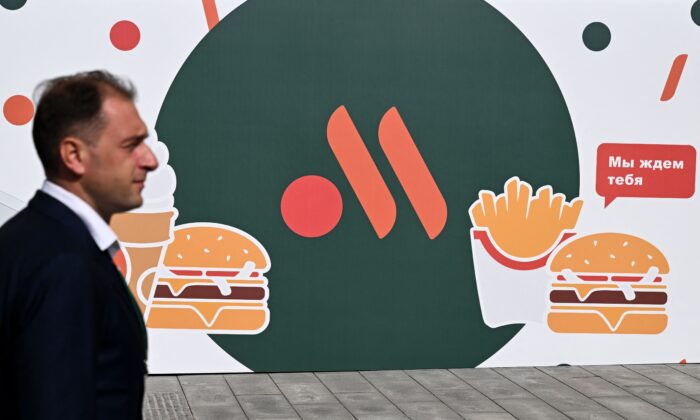 An employee stands in front of the new logo of the Russian version of a former McDonald's restaurant before the opening ceremony, in Moscow, on June 12, 2022. (Kirill Kudryavtsev/AFP via Getty Images)
Companies

McDonald’s announced that some of its restaurants will reopen in Kyiv this week, according to a company spokeswoman on Sept. 19, after closing down its operations in Ukraine and in Russia at the start of the war.

All 109 McDonald’s restaurants in Ukraine and the 840 in Russia were closed after the Russian invasion in February.

The fast-food chain continued to pay the salaries of more than 10,000 employees while its restaurants remained closed.

Three locations in Kyiv will be reopened on Sept. 20, but only for delivery, Alesya Mudzhyri, McDonald’s head of communications in Ukraine, wrote in a Facebook post.

The dining facilities, express windows, and McDrive will open in October, with new safety protocols to keep employees safe, she said.

“Restaurants will be open from 9:00 a.m. to 9:00 p.m. and will close during the air raid alert to allow employees and patrons to evacuate to the nearest shelter. At the same time, the team quickly issues already paid orders while stopping production processes and turning off equipment before closing,” said Mudzhyri.

She also said that resumption of operations in Kyiv and in the west of Ukraine are expected take place in stages over the course of two months.

“In about a week, seven more establishments in Kyiv will resume work, and later the rest of the restaurants will open in the capital and in various cities in the west of the country.”

McDonald’s promised in August that it would begin reopening its restaurants in Kyiv and western Ukraine, in response to its employees in that country wanted to return to work despite the war.

“We’ve spoken extensively to our employees, who have expressed a strong desire to return to work and see our restaurants in Ukraine reopen, where it is safe and responsible to do so,” said Paul Pomroy, a vice president for international operations at McDonald’s, in a statement.

“In recent months, the belief that this would support a small but important sense of normalcy has grown stronger,” he said.

Pomroy said that McDonald’s would gradually reopen its restaurants to “support the local economy and the Ukrainian people,” after discussions with the Ukrainian government and local suppliers.

McDonald’s first restaurant in Russia opened, with great fanfare, in Moscow in 1990, during the last months of the Soviet Union.

The fast-food company ceased operations in Russia after the Ukraine invasion, due to demands for Western firms to pull out of the nation.

“For the first time in our history, we are “de-Arching” a major market and selling our portfolio of McDonald’s restaurants,”wrote Chris Kempczinski, McDonald’s chief executive, in a letter to Russian employees and franchisees.

“They will no longer carry the McDonald’s name or serve our menu. The Golden Arches will shine no more in Russia.”

After mounting pressure from its 62,000 employees and its local consumers, McDonald’s put its Russian restaurants up for sale after two months.

The Moscow locations were reopened in June under the name “Vkusno & Tochka,” after they were purchased by Alexander Govor, who already owned 25 locations in Siberia.

All former Russian McDonald’s restaurants were set to reopen at the end of summer, according to the Russian restaurant mogul.

The rebranded chain will use Russian names for the old items on the menu, along with brand-new packaging and using local ingredients.

Classic items like the Big Mac and McFlurry, though, were not included on the new menu.

“The Big Mac is the story of McDonald’s. We will definitely do something similar,” said Govor to Reuters.

“We will try to do something even better so that our visitors and guests like this dish.”

However, a potato shortage caused by a poor harvest in Russia and the cut-off of supplies of spuds from its former Western suppliers forced the new chain to remove fries from its menu in August, according to The New York Times.

Meanwhile, Yum Brands, the owner of KFC and Pizza Hut, said last month that nearly all of its stores in the country had reopened, reported to Reuters.