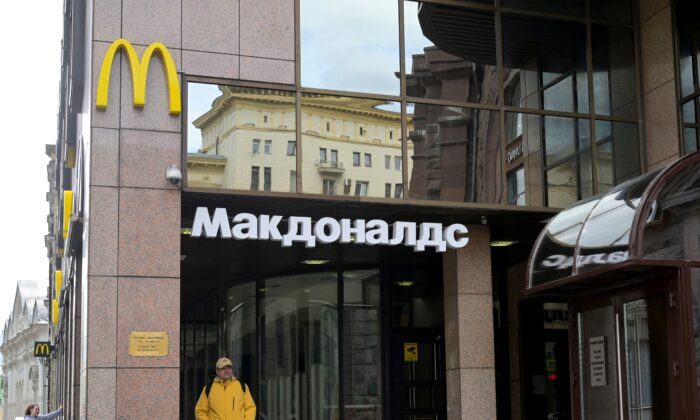 A man walks past a closed McDonald's restaurant in Moscow on May 16, 2022. (Natalia Kolesnikova//AFP via Getty Images)
Business & Markets

McDonald’s Selling Russian Business: Will Anyone Buy Restaurants When They Could Steal the Brand For Free?

McDonald’s Corp announced Monday its intention to sell its Russian restaurants. This comes as the company faces the potential of losing its trademarks in the region, which could harm the sale of the business.

McDonald’s will sell its Russian business due to the continuing international crisis happening between Russia and Ukraine.

The exit from the region comes after more than 30 years in the country. McDonald’s owns the majority of the 850 restaurants in the region, unlike some regions where it relies heavily on franchisees to operate the business.

McDonald’s closed the restaurants temporarily on March 8, 2022, with an original goal of opening them back up.

“The humanitarian crisis caused by the war in Ukraine, and the precipitating unpredictable operating environment, have led McDonald’s to conclude that continued ownership of the business in Russia is no longer tenable, nor is it consistent with McDonald’s values,” the company said in a press release.

McDonald’s plans to sell the restaurants to a local buyer, who will no longer use the company’s name, logo, branding or menu. McDonald’s is seeking a buyer that will employ the current 62,000 employees in the region.

Related Link: How Russia Is Trying To Replace McDonald’s And Peppa Pig

While McDonald’s is seeking a buyer, there is a risk that no company will step forward or the deal will come in less than the restaurant company expects.

Benzinga reported previously that a trademark filing on March 12 in Russia for “Uncle Vanya” came with the same colors and in a similar fashion to the logo of McDonald’s.

Trademark attorney Josh Gerben has suggested that Russia could allow local businesses the power to take over abandoned brands and locations in the country and operate them under other names.

Russia legalized patent theft from countries that are “unfriendly” to it, which includes the U.S. Russia will not make compensation mandatory for the businesses that previously hold trademarks or patents.

Russia could take the existing McDonald’s that were shut down and just let locals operate them as a McDonald’s or as a different restaurant. Given the tension between the U.S. and Russia and the trademark issues, it begs the question of if any local Russian company will pay McDonald’s for the businesses.

McDonald’s expects to record a charge or $1.2 billion to $1.4 billion to write off the investment in Russia. It is unclear if this is based on receiving any money from a sale.

“The loss of viable IP rights in Russia could also further isolate the country for years to come,” Gerben previously said.

Russia and Ukraine represent 9 percent of McDonald’s system sales and around 3 percent of operating profits on an annual basis, according to Morgan Stanley analyst John Glass.