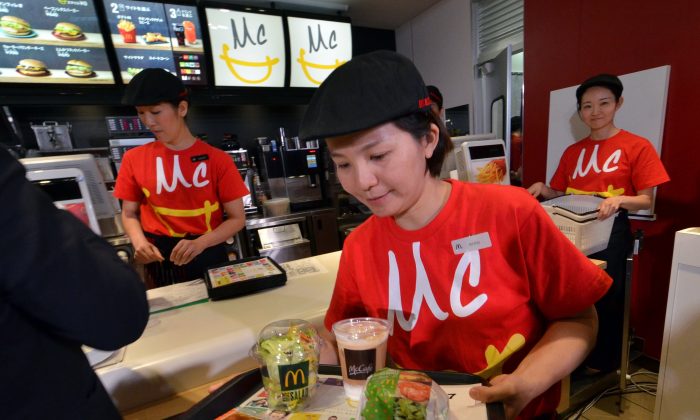 An employee of McDonald's Japan serves the new menu "Vegetable Chicken Burger" as the company president Sarah Casanova announces the new business strategy at a restaurant in Tokyo on May 21, 2015. (Yoshikazu Tsuno/AFP/Getty Images)
Companies

McDonald’s, facing a very different kind of chip crisis, is limiting the portion sizes of fries available to its Japanese customers due to shipping problems, the company said in a statement on Friday.

McDonald’s Holdings Company Japan said that it will sell only S-sized fries for a month from Sunday, Jan. 9, “to make sure we have plenty of inventory and our customers can enjoy McDonald’s fries without interruption.”

During that time, the company will suspend the sale of L size and M size fries on its menu to customers.

British Columbia is currently witnessing extreme winter weather with heavy snow and prolonged freezing rain which has seen flooding across the province in recent weeks.

A winter storm warning was in effect as of Thursday for all of Metro Vancouver, with hazardous winter conditions and significant rainfall expected.

Disruptions to the global distribution network due to the COVID-19 pandemic have also hindered McDonald’s Japan’s import services, the company said.

“We are taking various measures for stable supply in the future, such as arranging new distribution channels,” the company said. “We will continue to cooperate with importers and suppliers to maximize the stable procurement of raw materials so that regular sales of ‘McDonald’s Potato’ can be resumed as soon as possible.”

“We sincerely apologize for the inconvenience caused to our customers and everyone else, as McDonald’s cannot fulfill its responsibility to provide delicious meals at all times,” the company said.

The fast-food chain took the same step for a week at the end of December, from Christmas Eve to Dec. 30 at its roughly 2,900 branches in Japan.

“While it is difficult to procure raw materials in a stable manner, we have cooperated with importers and suppliers to proactively take alternative measures such as arranging airmail, and have continued to provide ‘McDonald’s Potato,'” the company said at the time.

The latest announcement comes shortly after the United States declared it had succeeded in its efforts to eliminate supply-chain bottlenecks ahead of the holiday season, a peak season in retail.

President Joe Biden declared ahead of a White House task force meeting on Dec. 22, that his administration had made “significant progress to alleviate bottlenecks that are rooted in the global pandemic,” and that shipping container wait time had been cut in half.

The supply-chain problems have been largely attributed to the COVID-19 pandemic, which has further exasperated material and labor supply shortages and led to an increase in commodity prices.