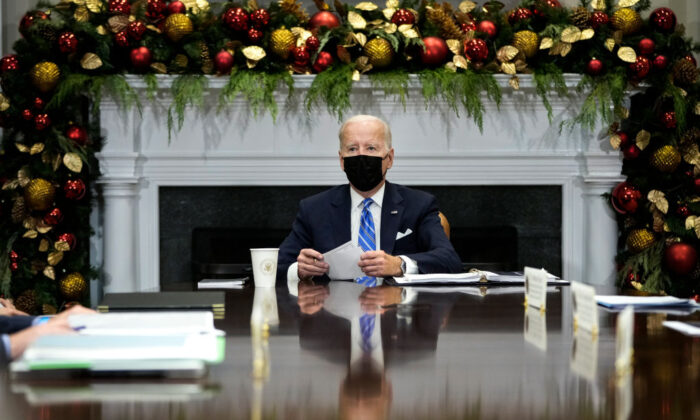 President Joe Biden speaks during a meeting with the White House COVID-19 Response Team in the Roosevelt Room of the White House in Washington on Dec. 16, 2021. (Drew Angerer/Getty Images)
Executive Branch

President Joe Biden declared ahead of a White House task force meeting on Dec. 22, that his administration’s efforts to eliminate supply-chain bottlenecks ahead of the holiday season had succeeded.

Biden met with his Supply Chain Disruptions Task Force, which consisted of administration officials and the CEOs of large private-sector companies.

The task force was established in June of this year to address the pandemic-induced global supply and inflation crisis.

The White House said that the task force had made “significant progress to alleviate bottlenecks that are rooted in the global pandemic,” and that shipping container wait time has been cut in half.

“The much-predicted crisis didn’t occur,” Biden said. “Packages are moving, gifts are being delivered, shelves are not empty.”

He said that shelves at grocery and drug stores were stocked at 90 percent of their full capacity, compared with 91 percent before the pandemic, and that deliveries were happening at a faster rate.

Biden pointed to the administration’s progress after pushing for round-the-clock port operations and new transport rules at some of the nation’s biggest ports, including the Ports of Los Angeles and Long Beach.

The president said he had spoken with the CEOs of Wal-Mart, Target, UPS, and FedEx on how to relieve the supply-chain backlog, as container ships and their cargo wait offshore at the two Southern Californian ports.

While thousands of loaded import containers have been cleared from the docks since the creation of the presidential task force, about 90 container ships still remain offshore waiting to unload.

At the conference, FedEx chair, Smith, said supply-chain issues are “not all solved” but that “most of Santa Claus’ products will be delivered to the consumers.”

Smith believes that inflation pressures should ease as soon as labor shortages in logistics and transport are filled, and said that “we think the peak season is going to be a good one.”

The supply-chain problems are largely due to the pandemic, which has led to high commodity prices, along with shortages in energy, labor, and essential parts.

It has been said that new environmental regulations in California have worsened the transportation slowdown as the logistics industry is readapting to the rules.

A recovering economy combined with a rebounding consumer market has caused a surge in demand which has caught many suppliers around the world unprepared.

Retailers have taken action to ease pressure on the overburdened supply chain by launching early holiday sales promotions and pulling holiday imports forward by a couple of months.

The White House said that fuel prices had dropped 12 cents a gallon on average to $3.30 since last month, but added that the president “believes that they are too high, especially given that we are emerging from a once-in-a-century pandemic.”

Biden had also called for the Federal Trade Commission to investigate excessive shipping fees and possible illegal conduct in oil and gas markets.