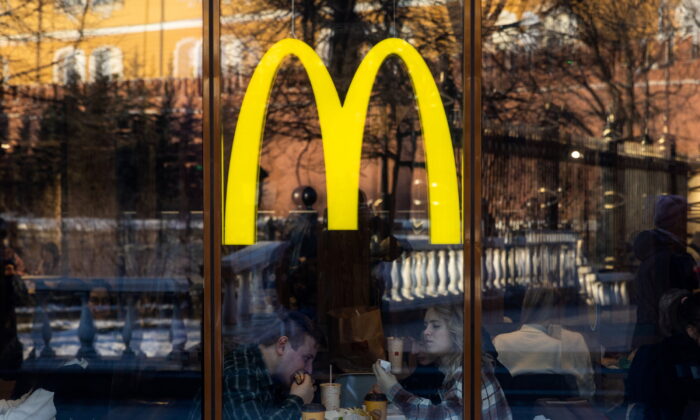 People eat in a McDonald's restaurant near Kremlin in central Moscow, on March 9, 2022. (Maxim Shemetov/Reuters)
Companies

McDonald’s is poised to take a bigger financial hit from the war in Ukraine than any other major global restaurant chain, with investors watching on Thursday when it reports first quarter earnings to see how much the company stands to lose.

Average estimates for full-year earnings for McDonald’s Corp. have fallen a little over 3 percent to $9.81 per share since it announced on March 8 that it would suspend operations in Russia following Moscow’s invasion of Ukraine.

McDonald’s previously said the suspension of operations would cost $50 million a month, including lost revenue and continuing to pay leases and wages for its Ukraine and Russia staff—but analysts have warned that figure could rise if the rouble rebounds.

“We believe it is prudent to model a complete loss of revenue from Russia given the state of the conflict. The wild card, in our view, is the extent to which management opts to continue paying its employees in that market,” BTIG analyst Peter Saleh said.

When McDonald’s said it would temporarily close its 847 restaurants in Russia, it set off a cascade of other chains announcing similar moves. In 1990, the burger chain became one of the first major Western brands to enter the country amid the fall of the Soviet Union and it owns 84 percent of its locations there.

Media outlets reported that some franchised locations in Russia were still open as of mid-March. Reuters could not immediately confirm that the locations remain open as of April 27. McDonald’s did not reply to requests for comment.

Restaurants in Russia and Ukraine generated about 9 percent of McDonald’s global revenue in 2021, far more than other fast-food chains in the region.

Closing its company-operated stores in what was once a key growth market has led some analysts to cut their McDonald’s profit forecasts for 2022 and 2023.

Morgan Stanley said it now expects net profit from the fast-food company of $9.25 a share for this year and $10.62 for 2023, reductions of 8 percent and 3 percent, respectively, from its prior view.

By Hilary Russ and Uday Sampath