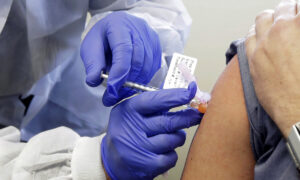 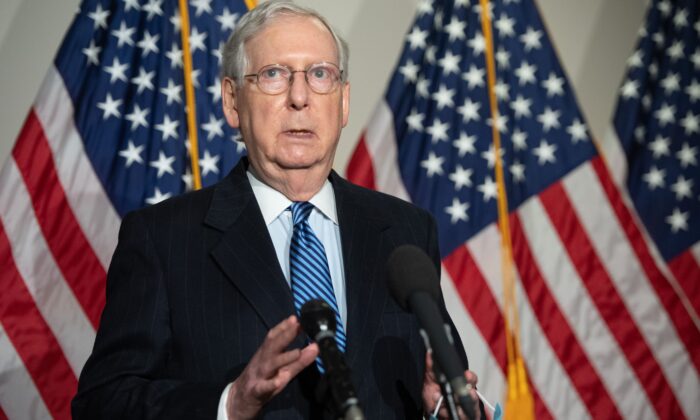 Senate Majority Leader Mitch McConnell (R-Ky.) said on Dec. 1 that more stimulus is urgently needed to help the country cope with the economic fallout from the pandemic, and called for a targeted relief package to be incorporated into the federal appropriations bill that Congress needs to pass soon to keep government agencies funded.

“We need a targeted relief bill” now, McConnell told reporters after meeting with his fellow Republican senators. “Waiting until next year is not an answer,” he said, adding there’s no point in Congress passing legislation that President Donald Trump won’t sign.

While McConnell didn’t provide details on his proposal, Reuters cited a Senate Republican source as saying it would be similar to McConnell’s previous plan and would include around $332 billion in new loans or grants to small businesses. Bloomberg reported that McConnell’s proposal doesn’t include state and local aid, aside from assistance for schools, and that it features liability protections for businesses. It also includes a one-month extension of pandemic unemployment compensation, with a two-month phase-out.

For months, McConnell has pushed a $500 billion approach that Democrats have rejected as inadequate. House Speaker Nancy Pelosi (D-Calif.) and Senate Minority Leader Chuck Schumer (D-N.Y.) previously sought a $2.2 trillion bill that McConnell dismissed. The White House went up to about $1.9 trillion during the height of the negotiation process.

But difficult talks over details remain with little time to spare, as Congress rushes to pass a $1.4 trillion federal appropriations bill by Dec. 11 to keep government agencies running. Without action, a number of government programs will be interrupted and many federal workers will be furloughed.

McConnell also said Schumer and Pelosi provided him with new ideas for reaching a compromise, which Schumer called “a private proposal to help us move the ball forward,” without elaborating on the details.

Earlier on Dec. 1, a third plan was floated by a bipartisan group of senators and House members seeking $908 billion in a range of CCP (Chinese Communist Party) virus relief measures.

State and local governments would receive direct aid under the bipartisan bill, a key demand by Pelosi and her fellow Democrats.

The measure also includes provisions that Republicans have been pressing for, including new liability protections for businesses and schools grappling with the pandemic.