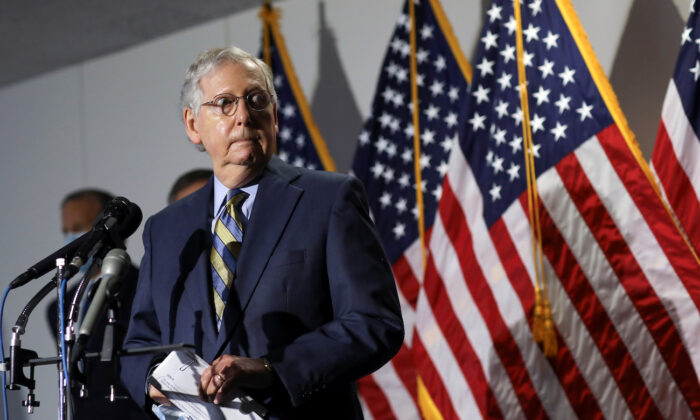 McConnell: Senate Will Vote Next Week to Confirm Barrett to Supreme Court

McConnell told a news conference about the move after a meeting with Republican lawmakers.

“We will be voting to confirm justice-to-be Barrett next Monday, and I think that will be another signature accomplishment in our effort to put on the courts, the federal courts, men and women who believe in a quaint notion that the job of a judge is to actually follow the law,” McConnell said.

Barrett faced three days of questioning from the Senate Judiciary Committee last week. McConnell said the committee is expected to approve sending the nomination to the full Senate on Oct. 22.

On Oct. 19, Senate Minority Leader Chuck Schumer (D-N.Y.) made a motion to get the Senate to adjourn until after the election is over.

“This is the most rushed, most partisan, least legitimate Supreme Court nomination process in our nation’s history, in our nation’s entire history, and it should not proceed,” Schumer said on the Senate floor.

He later wrote on Twitter that he was “forcing a vote to adjourn the Senate until after the November election.”

“We are not going to have business as usual here in the Senate while the Republicans try to use an illegitimate process to jam through a Supreme Court nominee.”

Republicans, who hold a 53–47 majority in the Senate, are still believed to have enough votes to confirm Barrett to the nation’s highest court. Three Republicans can vote against Barrett or abstain, and Vice President Mike Pence would still hold the tie-breaking vote.

“Judge Amy Coney Barrett demonstrated that she has the deep legal expertise, dispassionate judicial temperament, and sheer intellectual horsepower that the American people deserve to have on their Supreme Court,” McConnell said on Oct. 19, in the midst of Schumer’s maneuvers.

“I look forward to the Judiciary Committee’s vote on Thursday. The full Senate will turn to Judge Barrett’s nomination as soon as it comes out of committee. I’ll be proud to vote to confirm this exceptional jurist.”

In the midst of the push to confirm Barrett, Democrats floated the idea of “packing” the Supreme Court with more justices if Democrats win back the presidency and control the Senate. Later, Democratic presidential nominee Joe Biden and Harris refused to say where they stand on “packing the courts,” including when questioned about the issue during debates.