McConnell: Senate Hopes to Take Up Coronavirus Funding in Next 2 Weeks 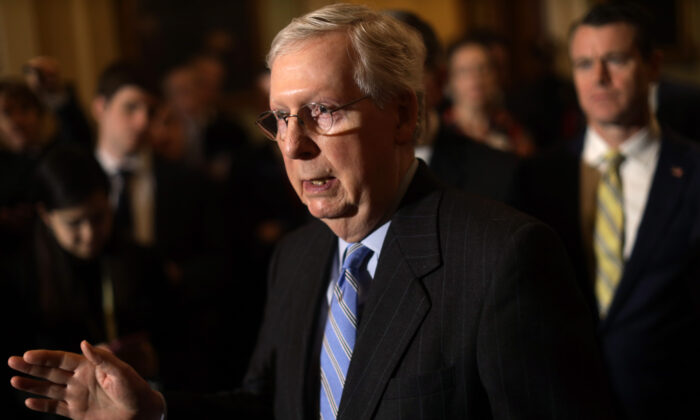 The Senate hopes to take up a funding measure to fight the spread of the new coronavirus within the next two weeks, Senate Majority Leader Mitch McConnell (R-Ky.) said Feb. 27.

“I have faith the [Appropriations] Committee will carefully consider the right sum to appropriate at this time to ensure our nation’s needs are fully funded,” he said, while speaking on the floor of the Senate in Washington. “I hope they can work expeditiously so the full Senate would be able to take up the legislation within the next two weeks.”

The White House submitted an emergency request for $2.5 billion to bolster efforts to prevent community spread of the virus in the United States. Congress grilled top health officials on Feb. 26 about the request and the nation’s preparedness for the possible spread of the virus. Some lawmakers said the funding request was inadequate and want additional funds committed to the efforts against the new virus.

President Donald Trump, speaking at a press conference on Feb. 26, said that the government might end up spending more than was requested.

Senate Minority Leader Chuck Schumer (D-N.Y.) outlined a proposal for $8.5 billion to fund the emergency response to the virus, which has 60 known cases in the United States so far, 45 of which are patients who were repatriated from Wuhan, China, or the Diamond Princess cruise ship that was quarantined off the coast of Japan.

McConnell criticized Schumer by saying bipartisan talks should have taken place before a proposal that differed from the administration’s was made public.

“I feel confident that the coronavirus does not care about partisan bickering or political news cycles. This new disease is not going to press pause so that members can engage in performative outrage that gets us farther from results rather than closer,” he said.

The Trump administration’s early actions, including restricting travel to and from China, helped “blunt and delay the spread of the virus here in our country,” he said.

“But a nation of nearly 4 million square miles and more than 300 million people cannot be hermetically sealed off from the rest of the world. There seems to be little question that COVID-19 will eventually cause some degree of disruption here.”

House Speaker Nancy Pelosi (D-Calif.), noting that “lives are at stake,” said Congress should make sure the government has the resources to combat the virus. Speaking at her weekly press conference on Capitol Hill, she said that Congress is getting close to a bipartisan agreement on funding for the virus response.

Pelosi and Schumer said in a joint statement that Democrats are worried that Trump would try to transfer some of the funding that Congress approves for something else, and aim to make sure that doesn’t happen. They also want the cost of a vaccine, if one is developed successfully, fixed at a certain amount, although Health and Human Services Secretary Alex Azar told lawmakers Feb. 26 that would be difficult.

“We can’t control that price because we need the private sector to invest. The priority is to get vaccines and therapeutics. Price controls won’t get us there,” he said.