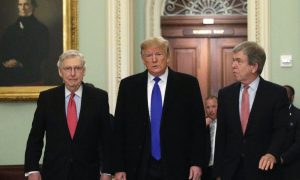 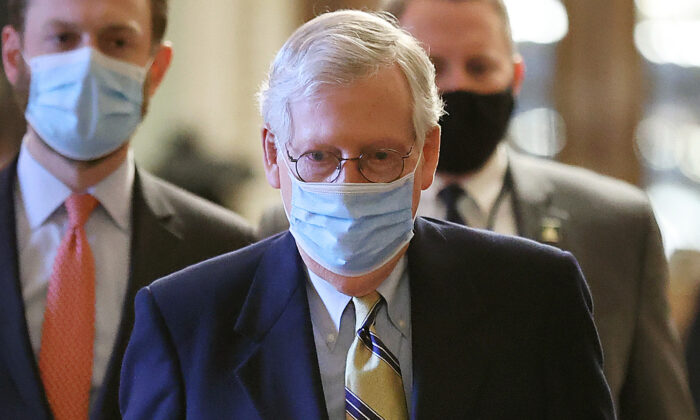 McConnell Says He’d Back Trump If He Wins 2024 Nomination

“There’s a lot to happen between now and ’24. I’ve got at least four members that I think are planning on running for president, plus some governors or others. Should be a wide open race,” McConnell said during an appearance on Fox News.

“The nominee of the party? Absolutely!” McConnell said when asked by Fox News’s Bret Baier whether he would back Trump if he wins the GOP nomination in 2024.

Trump hasn’t yet officially raised the possibility of a 2024 presidential run. However, he is expected to lay out his vision for America and give his assessment of Biden administration policies during his speech at the Conservative Political Action Conference (CPAC) in Orlando, Florida, on Sunday—the last day of the conference—according to his senior adviser Jason Miller.

His daughter-in-law and former senior adviser Lara Trump, however, indicated last week that he is “probably” interested in running for office in 2024.

“He has told us to stay tuned and that this is not over for him, and he has indicated that he probably would be interested in running again in 2024,” she told Fox News on Sunday, describing him as the “head of the Republican Party.”

“He is really the person that everyone will continue to turn to, in order to help them get across the line, whether we’re talking about 2022 or beyond,” she said. “I think this man has changed politics, and he has changed our party, the Republican Party. There is no doubt about it.”

Days before his daughter-in-law’s comments, Trump told Newsmax’s Greg Kelly that it was “too early” to make such a decision on his political future.

Others have expressed their optimism of a potential 2024 presidential run for Trump.

Sen. Mitt Romney (R-Utah) said Tuesday that he believes Trump would win GOP nomination if he ran for office again.

Trump “has, by far, the largest voice and a big impact in my party,” Romney continued. “I expect he will continue playing the role. I don’t know if he’ll run in 2024 or not. But if he does, I’m pretty sure he will win the nomination.”

McConnell’s latest remarks drew criticism from fellow Republicans, due to his speech on the Senate floor just weeks ago, in which he accused Trump of being “morally responsible” for the breach of the U.S. Capitol building.

The former president in response called McConnell an “unsmiling political hack” who is weakening the Republican Party.

On Feb. 28, Trump, in his first public appearance since leaving office on Jan. 20, is expected to outline his concerns about the direction President Joe Biden is leading America since being sworn in. Biden has issued a flurry of executive orders to reverse Trump administration policies.

The former president will focus on issues such as the amnesty push for illegal immigrants, the halting of the border wall construction, and the blocking of the Keystone XL Pipeline, according to Miller.