McConnell Says He Will Vote Against Jackson for Supreme Court 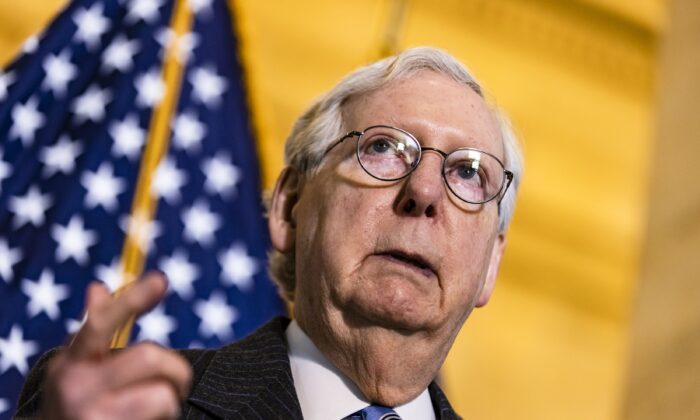 McConnell made the statement on the Senate floor after the Senate Judiciary Committee completed the fourth and final day of hearings for the federal appellate judge.

“I went into the Senate’s consideration of Judge Jackson’s nomination with an open mind. But after studying the nominee’s record and watching her performance this week, I cannot and will not support Judge Jackson for a lifetime appointment to our highest Court,” McConnell said.

The senator in the day prior had said he wasn’t sure whether to confirm Jackson to the high court.

In his remarks on Thursday, McConnell disapproved that Jackson didn’t take a stance on court-packing, which refers to adding more Justices to the Supreme Court, which currently has nine members.

“Judge Jackson refuses to reject the fringe position that Democrats should try to pack the Supreme Court,” McConnell said. The question should have been “an easy softball” for her, he added.

Jackson said the question is matter for Congress to decide.

“The nominee [Jackson] suggested there are two legitimate sides to the issue. She testified she has a view on the matter but would not share it. She inaccurately compared her non-answer to a different, narrower question that a prior nominee was asked,” McConnell said, referring to Justice Amy Coney Barrett.

McConnell said that Jackson “seemingly actually tipped her hand” during her testimony when she said she “would be ‘thrilled to be one of the however many.'”

“However many,” he repeated for emphasis.

McConnell also expressed concerns about her sentencing of criminal defendants, suggesting she was soft on crime.

“This is one area where Judge Jackson’s trial court records provide a wealth of information and it is troubling indeed. The judge regularly gave certain kinds of terrible criminal light sentences that were beneath sentencing guidelines and beneath the prosecutors’ requests,” McConnell said.

McConnell cited an example in Jackson’s rhetoric that “seems to confirm that deeply held personal policy views seep into her jurisprudence, and that is exactly what the record suggests.”

McConnell also suggested that Jackson would engage in “judicial activism.”

“It’s a recipe for courts to wander into policy-making and prevent healthy Democratic compromise. This is the misunderstanding of the separation of powers that I’ve spent my entire career fighting against,” McConnell said, later adding, “I will vote against this nominee on the Senate floor.”

Senate Majority Leader Chuck Schumer (D-N.Y.) said the chamber was “on track” to confirm Jackson to the lifetime job before the break for Easter expected on April 8.

The Senate Judiciary Committee is expected to vote April 4 on sending her nomination to the full Senate for a final confirmation vote.

A simple majority is needed to confirm Jackson. Democrats hold a slim majority in the evenly split 50–50 chamber because Vice President Kamala Harris can cast a tie-breaking vote, which means Jackson could be confirmed if Democrats altogether vote for the nomination, without any GOP votes.