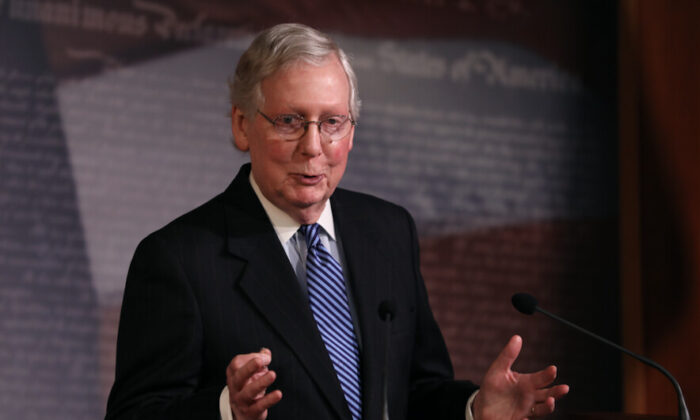 The impeachment effort against Republican President Donald Trump was a “political loser” for Democrats, Senate Majority Leader Mitch McConnell (R-Ky.), 77, said on Wednesday after Trump was acquitted of both articles of impeachment.

“Right now this was a political loser for them. They initiated it. They thought this was a great idea. And at least for the short term, it has been a colossal political mistake,” McConnell said at a press conference in Washington after the acquittal.

McConnell said that House Speaker Nancy Pelosi (D-Calif.), 79, was pressured to undertake the impeachment inquiry “against what appeared to be her political instincts,” citing Pelosi’s comments last year that she would not undertake an inquiry without support from Republicans.

No Republicans voted for impeachment in the House of Representatives and only one, Sen. Mitt Romney (R-Utah), 72, voted for the abuse of power charge. McConnell deflected questions about ejecting Romney from the Republican caucus, saying the senator “has been largely supportive of most everything we’ve tried to accomplish.”

The failed effort to remove Trump, 73, from office leaves Republican candidates in a better place ahead of the November elections, McConnell said, before issuing a message to Pelosi.

“The message to the House of Representatives: Don’t do this again,” he said.

McConnell said that he was “perplexed” by Pelosi’s strategy, which was to impeach Trump in December 2019 and then hold the articles for over three weeks before submitting them to the Senate. McConnell has said repeatedly that the House wouldn’t influence how the Senate conducts its business. He said that his staff counted House impeachment managers either saying the case against Trump was proven, proved, or that the evidence was overwhelming 99 times during the Senate trial.

“So where did the nonsense about witnesses come from?” McConnell said.

Democrats argued that additional witnesses were needed in the Senate trial because Trump blocked those close to him, including acting White House Chief of Staff Mick Mulvaney, from appearing during the inquiry.

Schumer, speaking at a press conference held after McConnell’s, said the trial lacked witnesses who had firsthand knowledge of the charges against Trump and that Democrats only named four they wanted to hear from.

Motions on subpoenaing additional witnesses were voted down last week. One came close, ending at 49-51. McConnell said he was proud of his caucus for mostly opposing witnesses, warning that Democrats wanted to make Supreme Court Chief Justice John Roberts decide whether or not to break a tie.

Roberts, 65, who was presiding over the trial, told lawmakers he would not have broken a tie vote.

“If the members of this body, elected by the people and accountable to them, divide equally on a motion, normal rule is that the motion fails. I think it would be inappropriate for me, an unelected official from a different branch of government, to assert the power to change that result so that the motion would succeed,” he said.