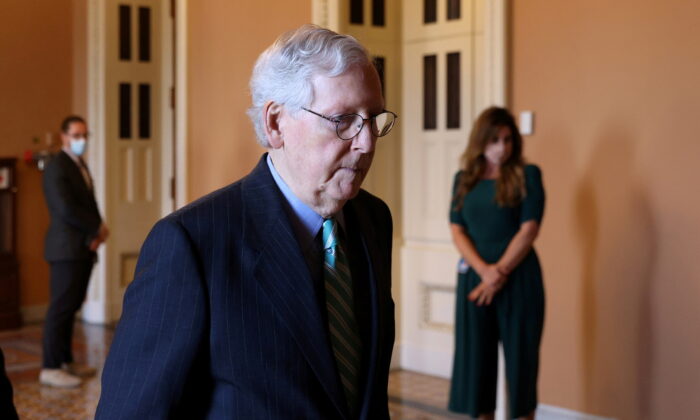 McConnell and 10 other Senate Republicans on Oct. 7 joined Democrats in temporarily raising the ceiling through Dec. 3, enabling Democrats to avoid using a process called reconciliation.

“Last night, Republicans filled the leadership vacuum that has troubled the Senate since January. I write to inform you that I will not provide such assistance again if your all-Democrat government drifts into another avoidable crisis,” the Republican wrote in a letter to the president.

Senate Majority Leader Chuck Schumer (D-N.Y.) and other Democrats repeatedly refused to turn to reconciliation, a process that would let the party raise or suspend the ceiling with zero Republican votes. McConnell repeatedly urged them to use reconciliation but after they refused, he helped them pass the short-term ceiling increase.

The move drew glee from Democrats and consternation from some Republicans who wondered why McConnell changed his mind and made the deal.

Sen. Ted Cruz (R-Texas) said: “We were winning that fight and Schumer was on the verge of surrender. And unfortunately, the deal that was put on the table was a lifeline for Schumer.”

McConnell addressed the critics in the letter, saying, “It got to the point where senators on both sides were pleading for leadership to fill the void and protect our citizens,” and “I stepped up.”

Schumer took to the Senate floor after the Oct. 7 vote and condemned Republicans, alleging they “played a dangerous and risky partisan game, and I am glad that their brinksmanship did not work.”

He also said that Republicans must in the future work with Democrats to address the debt ceiling.

Sen. Joe Manchin (D-W.Va.) was seen covering his face with his hands as Schumer spoke and later told reporters that it was inappropriate.

“Civility is gone,” he said.

Some Republicans reportedly confronted Schumer over his remarks, and McConnell hit Schumer for what he said.

“In a bizarre spectacle, Senator Schumer exploded in a rant that was so partisan, angry, and corrosive that even Democratic senators were visibly embarrassed by him and for him,” McConnell wrote to Biden.

“I am writing to make it clear that in light of Senator Schumer’s hysterics and my grave concerns about the ways that another vast, reckless, partisan spending bill would hurt Americans and help China, I will not be a party to any future effort to mitigate the consequences of Democratic mismanagement. Your lieutenants on Capitol Hill now have the time they claimed they lacked to address the debt ceiling through standalone reconciliation, and all the tools to do it. They cannot invent another crisis and ask for my help.”

White House press secretary Jen Psaki said on Oct. 7 that the administration hoped Republicans would vote with Democrats again in the future to address the debt ceiling “instead of choosing default or obstruction.”

“Our view continues to be that Leader Schumer has shown great skill in navigating this process—through a challenging process. We have confidence in his ability to do that moving forward,” she added during an Oct. 8 briefing.

“And I think it’s important to remember that the reason we were teetering on the edge of default and an economic calamity is because Republicans were refusing to join with Democrats, or even to allow Democrats to be the adults in the room and raise the debt limit themselves,” she said, referring to calls for Republicans not to filibuster a House-passed bill that would suspend the ceiling until December 2022.