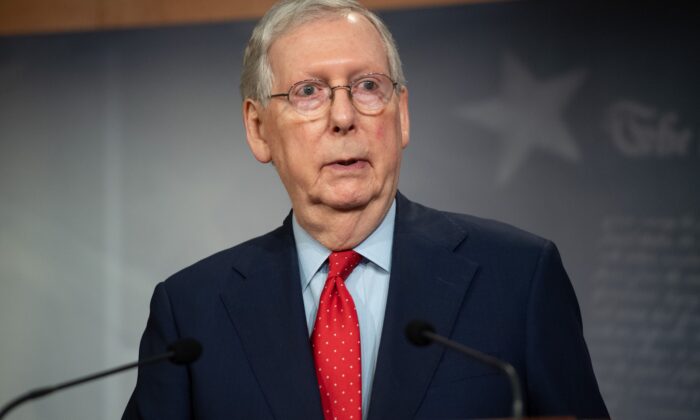 Senate Majority Leader Mitch McConnell holds a press conference after a session where the Senate passed a nearly $500 billion package to further aid small businesses due to the CCP virus pandemic, in Washington on April 21, 2020. (Saul Loeb/AFP via Getty Images)
By Isabel van Brugen

Senate Majority Leader Mitch McConnell (R-Ky.) said on Tuesday that the next COVID-19 relief bill must include liability protections for businesses that are reopening or it will not pass the Senate.

McConnell said that although he was open to providing further aid to states and cities as demanded by Democrats in another relief bill, providing liability protections for employers would be a “condition” for the bill.

“My red line going forward on this bill is we need to provide protection, litigation protection, for those who have been on the front lines,” McConnell told Fox News. “We can’t pass another bill unless we have liability protection. That’s the only way we’re going to ultimately begin to get past this.”

He added that the additional legal protections are crucial to reopening the U.S. economy.

“We are in a place that we have never been before and we are all hoping for a rapid recovery,” he said. “I think that we get a more rapid recovery if we have liability reform [and] if we have testing that reassures people, because the economy will not truly be open unless everybody’s willing to participate in the economy again.”

“That will be a condition for providing additional assistance to state and local governments,” McConnell said.

“We have a red line on liability,” he added. “It won’t pass the Senate without it.”

Amid relief talks, funding for state and local governments has become a point of contention between Republicans and Democrats.

House Speaker Nancy Pelosi (D-Calif.) said on Sunday that the next COVID-19 relief legislation will include “significant” funding for state and local governments. The National Governors Association has said that states need at least $500 billion in assistance.

In an appearance on CNN’s “State of the Union,” Pelosi pushed back against criticism from governors nationwide, including New York Gov. Andrew Cuomo, who said last week that state funding and federal support should have been granted in previous legislation.

“Just calm down,” Pelosi told CNN’s Jake Tapper when asked whether House Democrats made a tactical error in supporting the latest relief package. “We will have state and local, and we will have it in a very significant way.”

Pelosi said that it’s “no use going on to what might have been,” responding to Cuomo’s remarks that he would have “insisted” on including pandemic funds for states in the latest relief package for the CCP (Chinese Communist Party) virus, also known as the novel coronavirus.

The Senate earlier this month negotiated a $484 billion relief package to combat the effects of the CCP virus. The relief package includes aid for small businesses, hospitals, and funds for increased CCP virus testing. It didn’t include funding for state and local governments. The nearly half-trillion-dollar package was added to the $2.2 trillion rescue package passed by Congress in March to mitigate the economic effects of the pandemic.

McConnell’s proposal has been met with criticism from Democrats, with Senate Minority Leader Chuck Schumer (D-N.Y.) saying on Tuesday that he is just “putting barriers in the way of giving state and local governments desperate money they need.”

Schumer told reporters that he has concerns even though he had not seen the full details of McConnell’s proposal.

“I haven’t seen the details of what he said, but is he saying that if an owner tells a worker they have to work next to somebody who might have coronavirus without a mask or [personal protective equipment], that that owner wouldn’t be liable? That makes no sense,” Schumer said.

Meanwhile, Pelosi said Tuesday that Democrats do not have “any interest in having any less protection for our workers.”

“We don’t need any prescription from anybody about mythology or just excuses not to do the job. It’s really sad. It’s disgraceful because there is such tremendous need,” she told reporters.