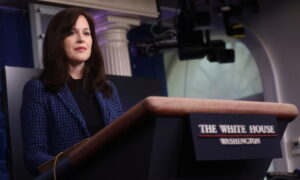 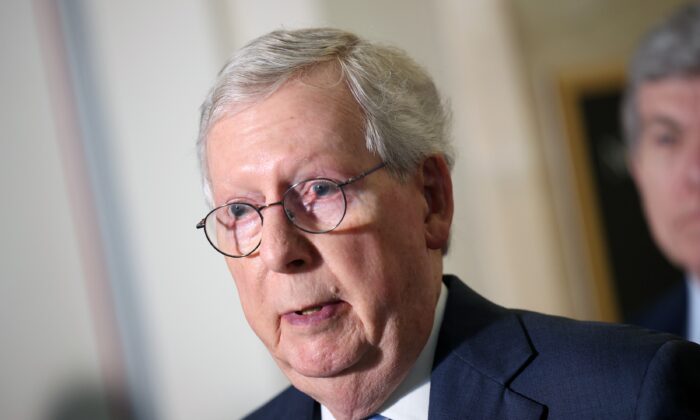 McConnell: Infrastructure Plan Should Be Smaller and Fully Paid For

As negotiations drag on for a major infrastructure package, the top Republican in the Senate on Thursday said the final deal should be fully paid for.

“We’re still hoping we can come to an agreement on a fully paid for and significant infrastructure package. I know that would be welcomed by all state governments and local governments all over the country,” Senate Minority Leader Mitch McConnell (R-Ky.) told reporters in Kentucky.

Biden and Sen. Shelley Moore Capito (R-W.Va.) have been meeting regularly to try to hammer out a deal. They met for around an hour on Wednesday.

“Senator Capito reiterated to the president her desire to work together to reach an infrastructure agreement that can pass Congress in a bipartisan way,” a spokesperson for the senator told news outlets. “She also stressed the progress that the Senate has already made. Senator Capito is encouraged that negotiations have continued.”

Capito said on Sunday that the two sides are “inching toward each other.”

McConnell told reporters he spoke with Capito before and after the meeting. He said he asked Capito to lead negotiations on infrastructure for Republicans.

“We’re still hoping to reach a bipartisan agreement with the administration on infrastructure,” he said.

Biden’s initial proposal would have raised the corporate tax rate from 21 percent to 28 percent. The rate was slashed to its current level in the GOP’s tax reform bill, which was passed by many current members in 2017 before being signed by then-President Donald Trump.

Republicans have maintained that any infrastructure plan should include payment methods apart from adding to the national debt and preserve the tax cuts from the 2017 bill. Some of the funding could be drawn from the money Congress allocated to state and local governments in the latest COVID-19 relief package, McConnell suggested.

Biden and Capito plan to reconnect on Friday. It’s possible the meeting will happen over the phone, as Biden is vacationing in Delaware.

“I know everybody is excited to work through the weekend. Look, I’m not going to prejudge what Senator Capito will come to the table with tomorrow. I will leave that to her to speak to and other Republicans who have been a part of these good-faith discussions and negotiations,” Psaki said in Washington. “I will note that this has been a good discussion and—good, ongoing discussion where we’ve—we’re working to find areas of agreement. We also feel there are a number of paths forward.”