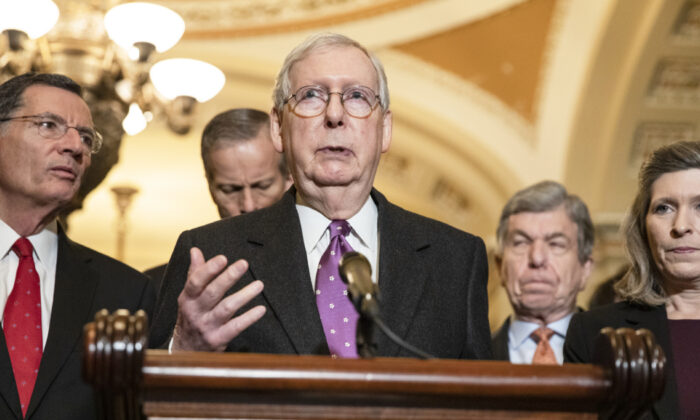 McConnell told the Senate that more limited legislation could be sought as he eyed the coronavirus relief bill unveiled by House Democrats on Wednesday.

“Unfortunately, it appears at this hour that the Speaker and House Democrats instead chose to produce an ideological wish list that was not tailored closely to the circumstances,” McConnell said. “I hope Senate Democrats will not block potential requests from our colleagues today to pass smaller, non-controversial pieces of legislation today.

“One is reminded of the famous comment from President Obama’s first chief of staff: ‘You never want a serious crisis to go to waste,'” he added.

The proposals were announced at a press conference on Wednesday as the House Democrats and the Trump administration tried to work toward an agreeable economic stimulus package to help Americans through the financial impacts of the virus outbreak.

However, the proposal has not received wide-ranging support, with Republicans raising questions about the support it would receive in the House and its future in the GOP-controlled Senate.

“The country is looking to the government to come together and meet these challenges, but the bill that we saw that just came forth last night at 11 p.m. comes up short,” House Minority Leader Kevin McCarthy (R-Calif.) told reporters at a press conference on Thursday.

McConnell had been urging for bipartisan efforts at passing “smaller, non-controversial pieces of legislation.” But as the day dragged on and no deal emerged from the Pelosi-Mnuchin telephone negotiations, McConnell closed up the Senate for the week, announcing it would return on Monday.

He added the Senate will be delaying its recess and will work next week on a coronavirus relief bill.

He said in a Twitter post that he was glad that the talks between the Trump administration and Pelosi were continuing.

“I hope Congress can pass bipartisan legislation to continue combating the coronavirus and keep our economy strong” he said.

However, he expressed concern that the House Democrats’ current bill would create new layers of bureaucracy that could cause “massive job losses” at businesses and put “thousands of small businesses at risk.”

The Senate Democrats in their COVID-19 Economic and Community Services Proposal on Wednesday, included measures for loan payment relief for up to six months on federally insured mortgages and student loans, emergency mortgage and rental assistance, federal funding for local communities, grants for small businesses, and additional funding for food banks, schools, and nonprofit, Schumer revealed.

President Donald Trump, meanwhile, has proposed a suspension of the payroll tax through the end of the year as a direct way of helping families get through the coronavirus crisis. The New York Times reported that measure would add nearly $1 trillion to the national debt through lost tax revenue, and see the government cease the collection of 6.2 percent Social Security tax currently deducted from workers’ paychecks and the 1.45 percent tax for Medicare.

Democrats have argued that that the proposal is too broad and would not be the most effective way of helping Americans.

The president has also proposed providing loan guarantees to the cruise ship, hotel, and airline industries affected by the coronavirus outbreak.