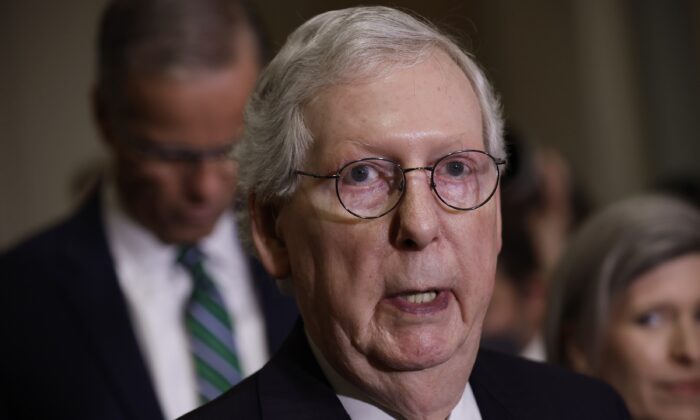 “House Democrats must pass this bill and they need to do it today,” McConnell said on the floor of the Senate.

Nicholas John Roske was arrested with a pistol, a knife, and other items on Wednesday morning in Montgomery County, Maryland, near where Kavanaugh and his family live, according to court documents obtained by The Epoch Times.

According to the documents, he told law enforcement officials that he was angry over last month’s leak suggesting the Supreme Court would overturn Roe v. Wade, a landmark case that allowed women to obtain abortions. Roske also said he believed that Kavanaugh would side with other justices on “Second Amendment decisions that would loosen gun control laws,” the court documents said.

“A man in his mid-twenties was stopped near the house of a Supreme Court Justice carrying a weapon and burglary tools,” said McConnell. “He reportedly told police he intended to murder the Justice. Reportedly, he indicated he was angry at the decision he thinks the Court may reach in an upcoming case in light of the unconscionable leak from a few weeks back.”

The Republican Senate leader then turned his attention to House Democrats, who haven’t yet voted on a measure to bolster security at the homes of Supreme Court justices’ homes following protests over the Roe v. Wade leak. The Senate had passed the measure, but it has remained stalled in the House.

“This is exactly, exactly, the kind of event that many feared; that the terrible breach of the Court’s rules and norms could fuel,” McConnell said, adding that Democrats have blocked the Senate-passed measure. “This is exactly the kind of event that many worried the unhinged, reckless, apocalyptic rhetoric from prominent figures toward the Court going back many months and especially in recent weeks could make more likely.”

McConnell then asserted: “This is exactly, exactly why the Senate passed legislation very shortly after the leak to enhance the police protection for Justices and their families. This is common-sense, non-controversial legislation. It passed in this chamber, in this chamber, unanimously.”

It’s not clear if House Democrats will heed McConnell’s plea to quickly pass the measure, known as the “Supreme Court Parity Act,” in light of the recent arrest.