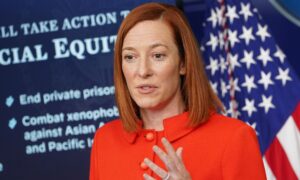 Senate Majority Leader Chuck Schumer (D-N.Y.) and Republican Leader Mitch McConnell (R-Ky.) are close to striking a deal on a resolution that will formalize the structure of the proceedings of former President Donald Trump’s impeachment trial, according to multiple reports.

“We are finalizing a resolution that’s been agreed to by all parties—the House managers, the former president’s counsel, Leader McConnell and I—that will ensure a fair, honest, bipartisan Senate impeachment trial of Donald Trump,” Schumer said at a press conference in New York on Monday.

“We’ll be releasing more of the details today, but I’m proud to report each side will have ample time to make arguments.”

If the House impeachment managers decide they want to call witnesses—they called none before voting to impeach in the lower chamber—there will be a vote, according to Schumer.

According to Politico, the framework that is being hammered out for the impeachment trial is set to allow for up to four hours of debate on Tuesday about whether putting a former president on trial is in line with the U.S. Constitution.

Schumer’s spokesman said on Sunday that the Senate will pause the impeachment trial from Friday evening to Saturday evening in response to a request by a Trump attorney who observes the Jewish Sabbath.

“We respect their request and of course will accommodate it,” Schumer spokesman Justin Goodman said in a statement.

Trump attorney David Schoen sent a letter to Schumer and other top senators on Tuesday requesting impeachment proceedings be paused during the Sabbath, which lasts from sundown on Friday to sundown on Saturday.

The one-day delay raises questions about how long it will take to finish the trial, which is set to begin in the Senate on Tuesday. The Senate is not currently scheduled to be in session during the week of Feb. 15.

Both Republican and Democratic lawmakers have publicly stated that they want a speedy trial, as the Senate cannot move forward with its legislative priorities until the trial is complete. Many Republicans have decried the trial as a partisan exercise that will lead nowhere. Last month, during a procedural vote, 45 Republican senators voted against holding the trial, suggesting that the former president will not be convicted, as the Senate requires 67 votes for a conviction.

Trump’s lawyers have said they will argue that the impeachment trial is unconstitutional because Trump no longer holds office and will say that his speech was protected under the First Amendment. Trump’s impeachment trial will be the first of a U.S. president no longer in office.

Harvard Law School professor emeritus Alan Dershowitz said on Feb. 6 that an effective legal defense is based on challenging the constitutionality of the allegations against Trump.

“The best arguments he can make, and his lawyers will make, are the constitutional ones, namely the Senate has no jurisdiction over a former president, and the speech was covered by the First Amendment,” Dershowitz told Newsmax.

According to a tally by The Epoch Times, 35 Republican senators have suggested or committed to voting to acquit Trump in trial. Unless Democrats can sway 17 of the 50 Republicans in the upper chamber, Trump will be acquitted.

If Trump were to be convicted, the Senate could hold a subsequent vote to bar him from ever holding office again. Unlike an impeachment conviction, which requires two-thirds of the Senate to be adopted, only a simple majority would be required to ban Trump from future office.

As the opening of Trump’s impeachment trial approaches, there is a growing body of evidence in criminal complaints and affidavits that the Capitol breach had been pre-planned, undercutting the allegation leveled against Trump that he is guilty of “incitement to insurrection.”

A number of FBI affidavits filed in support of various charges—including conspiracy—against accused participants in the Capitol breach show evidence of pre-planning, reinforcing one of the arguments made by critics of the impeachment trial against Trump, namely that participants couldn’t have been incited by the president to break into the building if they had earlier planned to do so.