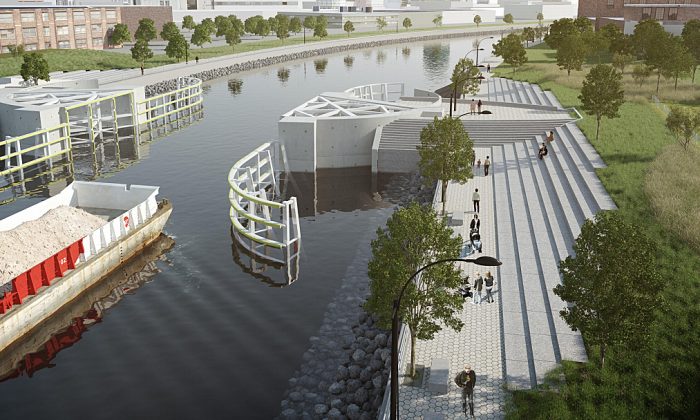 An artists rendering of what a proposed surge barrier at Newtown Creek could look like, taken from a slide from Mayor Michael Bloomberg's presentation on June 11, 2013. The mayor delivered his much anticipated protection plan for New York City, which includes 250 recommendations, many of which the next mayor will have to implement. (Rendition courtesy The Mayor's Office)
New York

NEW YORK—With just under seven months remaining in his third and final term, Mayor Michael Bloomberg released his much anticipated post-Sandy plan on June 11. “A Stronger and More Resilient New York,” is aimed at protecting New York City from the effects of climate change long after Mayor Bloomberg leaves office.

The city estimates the plan will cost $19.5 billion if completed on time, a cost that dwarfs the $12 billion the Army Corps of engineers spent thus far to improve New Orleans’ flood-walls, gates, and levees since Hurricane Katrina in 2005.

Many of the recommendations will take years to implement, some over a decade. This leaves the responsibility of executing the resiliency plan squarely on the shoulders of the next mayor of New York.

Several mayoral candidates praised the mayor for thinking big, including Democrat Sal Albanese and Republican George McDonald, who said they were inclined to pursue its major initiatives.

Democrat Bill de Blasio, the city’s elected public advocate, praised the all-encompassing approach but said officials need to ensure the plan does enough to help the poor and doesn’t rely too much on uncertain federal support.

Republican John Catsimatidis, who has questioned whether the effects of climate change are overstated, wondered in a statement whether the city could spend considerably less and still get adequate protection.

“The $19.5 billion price tag is a huge amount of money,” said the billionaire candidate, whose businesses include oil, real estate and grocery stores.

Former head of the MTA Joseph Lhota, who is running as a Republican, saw firsthand the impact of Hurricane Sandy. He joined the race in January with the media still glowing over his ability to get the subway system back up so quickly.

He said Bloomberg deserves enormous credit for putting together such a comprehensive plan.

“He has done the next mayor—me—a great favor by putting this plan out there,” Lhota said by phone June 12. “As the next mayor, I will implement as much of this as I physically can and make sure the people of New York City are protected.”

Lhota said his work at the MTA, as well as serving as deputy mayor in the Giuliani administration showed him how important planning was in disaster-preparedness, something he feels gives him a leg up on the competition.

“Very few people running for mayor have run large, complex organizations that have prepared them for disasters,” Lhota said.

Speaker Christine Quinn, who is running on the Democratic ticket, was also supportive of the mayor’s vision.

Quinn has perhaps the most inside knowledge of how the city has recovered thus far. Two weeks after Sandy she called for an immediate plan to ensure the city was ready to deal with climate change.

“I was very gratified that much of what the mayor talked about was exactly what I talked about in that speech,” Quinn said from City Hall on June 12.

Quinn, who has lead the Council through seven budget seasons, will be at the helm of adding $250 million into this year’s budget to begin some of the projects the Mayor outlined in his report.

As a member of the City Council, Quinn has already introduced a package of 10 bills aimed to improve response, as well as changes to building codes, measures already included in the Mayors plan.

“Let’s be clear, making this city climate change ready, is the biggest infrastructure project of our time. We have to do it,” Quinn said. “We don’t get to tell New Yorkers we were not prepared again.”

The mayor’s plan, while comprehensive, is not fully funded. The next mayor will need to bridge a $4.6 billion gap, in addition to a looming projected $7.2 billion tab the city would owe to labor unions for expired contracts.

Bill de Blasio said in a statement, “in the current fiscal environment, we must ensure that we prioritize resources effectively, so that we can fund the most critical elements of this plan in the short term, and be careful not to overly rely on additional federal support that may be a long time, at best, in coming.”